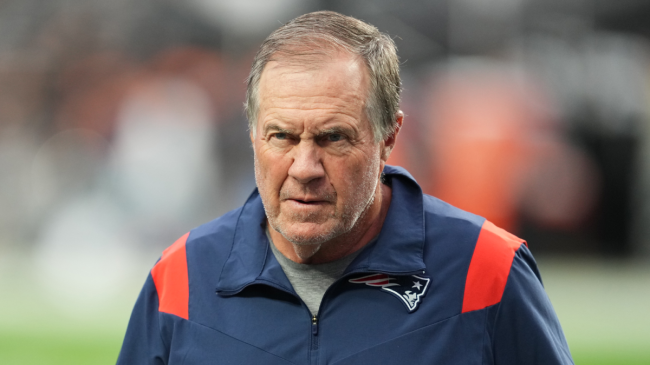 New England head coach Bill Belichick is known for his stern, monotonous demeanor on the sidelines in Foxborough. The Patriots’ fearless leader was nicknamed “Doom” while working in New York for just those reasons.

It’s the perfect moniker to sum up Belichick’s serious appearance and gloomy persona. But believe it or not, there is another side to the head coach.

Ravens’ quarterback Lamar Jackson was heard Wednesday talking about his first encounter with Belichick, which came while he was going through the NFL Draft process. To Jackson’s surprise, the coach was smiling in that first meeting.

The Ravens will take on the Patriots this weekend as both teams look to move to 2-1 on the season. With the matchup looming, reporters asked Baltimore’s signal caller about his previous interaction with New England’s head coach.

Lamar Jackson recounted his first meeting with Belichick, and to the quarterback’s astonishment, he had a large grin on his face. The passer was taken aback by the smile, as he’d come to know the head coach for that dour image we often see on television.

Here’s what he had to say while telling the media about that first encounter.

“I’ve seen Belichick smile. Usually when I see him, he’s like this poker face, straight-face guy. When I saw him smile, I was like ‘Dang, you got humor… I wasn’t expecting you to be smiling.'”

The surprising reaction, of course, stirred up Patriots fans, who now believe Jackson will end up in New England if he doesn’t receive a contract extension with the Ravens.

A number of Patriots fans weighed in on the clip, with most saying that the quarterback will end up in Foxborough if he’s not re-signed by Baltimore.

There was no shortage of “Lamar’s going to the Patriots” responses in the comments section, as New England fans are apparently already done with Mac Jones.

Lamar Jackson, YOU are a Patriot https://t.co/XvBm195GfR

The Ravens couldn’t reach an agreement with Jackson over the offseason, as he reportedly wants a fully guaranteed deal. He might just get it if he keeps up the performance we’ve seen through the first two games (531 pass yds, 136 rush yds, 7 TDs).

Belichick was asked if he believed Lamar Jackson had answered those pre-draft concerns that many had early on in his career. His response was an emphatic, ‘yes.’

“Without a doubt. He’s the type of players that’s an MVP candidate. … Wait until we see what his contract is, that will answer them.”

It certainly seems like Belichick likes what he sees in Jackson. If things go south in contract negotiations with Baltimore, maybe we know his next landing place.