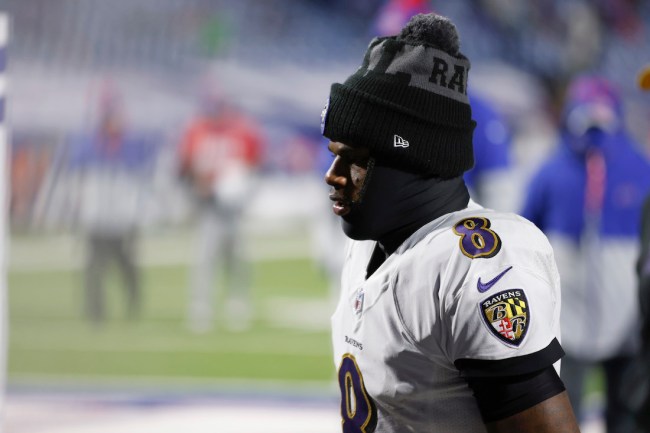 Two years ago, Lamar Jackson lit up the NFL on his way to winning the league’s MVP, proving that he’s a once-in-a-generation talent at the quarterback position. While the former first-rounder hasn’t done anything to show otherwise since then, at least one NFL expert thinks the Baltimore Ravens may want to consider selecting Jackson’s replacement during the 2021 NFL Draft, tossing out a scorching hot take about the topic.

Bucky Brooks, an analyst for both the NFL Network and NFL.com, believes that the Ravens could get sneaky during the draft, suggesting the team could possibly use its two first-round picks to move up and select Justin Fields — the former Ohio State signal-caller who seems to be falling down draft boards for no apparent reason. But why the hell would Baltimore want to get ride of Jackson? Well, simply put, so that the team doesn’t need to drop bank on retaining the Pro Bowler to a massive extension.

Discussing the NFL Draft and, more specifically, the Ravens this past weekend, Brooks gives his reasoning for why the Ravens might seriously want to consider choosing Fields (should he fall in the NFL Draft) to replace Lamar Jackson.

“In Harbaugh’s words he said, ‘We are the Army of the NFL,’” NFL Network analyst Bucky Brooks said during a television appearance.

“I just wonder about a scenario if Justin Fields happened to fall low enough where he is within range, if the Baltimore Ravens decide to really go all in on this Army approach – meaning they take a collegiate approach to the quarterback position. They cash in on a blue chip, they take Justin Fields, and then maybe they operate like a college team: One quarterback graduates, the other quarterback steps into the starter’s role.”

“You now have the opportunity to keep a starting quarterback, potentially, on a young deal,” Brooks said. “Build up the rest of the assets, play smashmouth football the way that they play and continue to build a better team around the quarterback. Something to think about.”

This is something that sounds moronic on paper, but, when you dig into the details, might actually be something worth considering if you’re the Baltimore Ravens. Sure, Lamar Jackson’s a top-5 quarterback in the league — and presents a problem with his improvisational skills more than just his stats alone — but could his style of play lead to injury? Could his wonky throwing motion never improve? More so, does the extension he want just be too rich for the Ravens, with the Boston Globe reporting in February that the two sides aren’t close on a new deal? All things to consider.

With an NFL Draft loaded with quarterback prospects, maybe the Ravens take a flier on choosing Justin Fields or somebody else should he slip. We’ve seen other teams do something similar to this in the past, with the Packers doing it with Aaron Rodgers as protection for Brett Favre. Hell, even the Ravens did it in 2018 by choosing Jackson to compete with former Super Bowl MVP Joe Flacco, so this might not be that extreme of an idea.

Then again, Bucky Brooks did backpedal on Twitter a little bit after his bold suggestion, saying he doesn’t think the Ravens will draft a quarterback to potentially replace Lamar Jackson, but that it’s something the franchise could do because of their offensive system.

It’s cost effective and enables the Ravens to keep a five-star cast in place on both sides of the ball. I’m not saying that they will do it but some team should explore utilizing a collegiate model at QB. Unless you have an elite QB, let ‘em graduate and find another

Don’t overpay for average performance and production. I comes back to bite you in the end. Food for thought..

It’s hard to imagine the Ravens are even considering taking a quarterback at any point in the NFL Draft, but, because of the financial implications and the amount it could save them, maybe they shock the world and do it? It’d absolutely bury their relationship with Lamar Jackson — and would immediately cause tension in the locker room — but, hey, the NFL’s a business, so anything can happen.