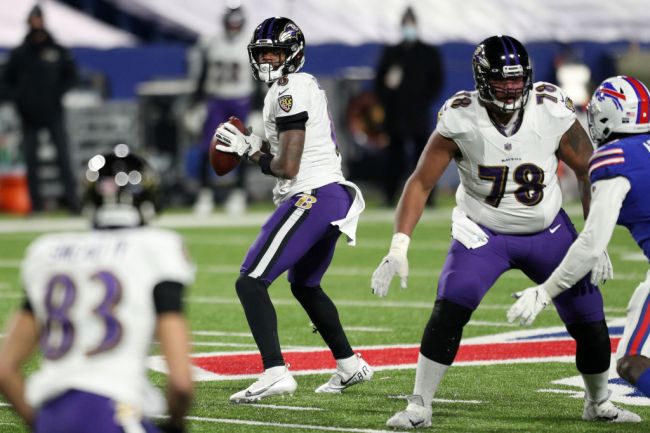 Lamar Jackson has operated almost entirely out of the pistol formation during his first three years in the NFL. That is set to change this fall.

Baltimore’s offensive coordinator Greg Roman told the media on Wednesday that the offense will include plays that begin with Jackson under center in 2021. This comes amidst increasing criticism for the one-dimensional nature of the Ravens offense.

Jackson, who has run for more than 1,000 yards in his last two seasons, is not considered one of the top arms in the league. While his wide receiver room isn’t necessarily stacked with weapons, a good quarterback can throw anyone open. Baltimore added Sammy Watkins this offseason, but the first look at the Jackson-Watkins connection from OTAs was rough. Jackson threw an absolute duck.

The clock is ticking for Roman and the team to develop their fourth-year quarterback as a passer. Implementing under-center formations is an effort to help that process.

“It’s something we will certainly use from time to time, some games more than others,” Roman said. “I believe it’s a very important part in the development of a quarterback from a forward standpoint.”

Roman is right, and the hope is that running play-action will allow Jackson more of an opportunity for success. By going under center, the quarterback does not have to watch the ball into his hands. However, he must completely turn his back to the defense. By doing so, the entire situation can change when he turns his eyes back. This is something Jackson has never done before on the NFL, so it will be interesting to see how it factors in.

In three years, Jackson’s highest completion percentage was 66.1% in 2019. Will going under center help him find a groove? Stay tuned.