Here We Go! The First Clips Of LaMelo, LiAngelo Ball On The Court In Lithuania Are Here 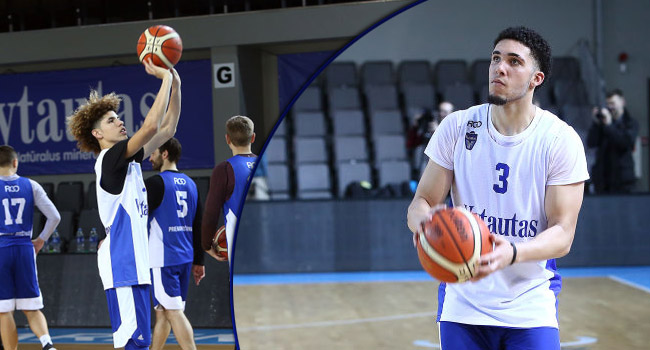 It’s time, folks! LaMelo and LiAngelo Ball have hit the court in Lithuania for Vytautas and we’ve got some of the first clips right here. Very shortly we will get to see whether the completely overblown welcome the Ball brothers received when they arrived in the country was worth it. (I am betting that it won’t. Just a hunch.)

Although, as we saw back in December, not everyone in Lithuania is completely on board the Ball train. Not to mention the fact the the Ball brothers’ new coach in Lithuania sounds like a bit of a maniac. If nothing else, this whole things could be this biggest trainwreck since the Mayweather-McGregor World Tour. Especially if it turns out to be the disaster that players who have played in Lithuania in the past expect it to be. So there’s that.

Thankfully for us, LaMelo and LiAngelo Ball’s first game, BC Vytautas versus BC Žalgiris, will be streamed online by Ball Is Life beginning at 1:30 PM ET today.

Until then, here are some clips of the Ball brothers, and LaVar (of course) that have been rolling in of their pre-game activities. (Get your jerseys here.)

LaMelo warming up with some pump up music playing 😂 @MELOD1P pic.twitter.com/Mnt9zIYme8

LaMelo Ball warming up to dominate in Lithuania 🔥 @MELOD1P pic.twitter.com/S6GSxisvu1

Gelo Ball warming up on the BBB court in Lithuania 🚨 @LiAngeloBall pic.twitter.com/ef9kiw22Rn

LaVar talks about his sons making their debut in Lithuania and eventually being LAKERS 🎬 @Lavarbigballer pic.twitter.com/ic8Vuu4fBa

We’ll be updating this post as more clips are released. What fun!

Lamelo is officially a pro. His first shot was brutal pic.twitter.com/CD3TAd0vaf

LaMelo's first point as a pro in Lithuania came at the free-throw line pic.twitter.com/g0DWlw8yze

Full highlights of the game in which Melo had 10 points and 9 assists while Gelo had 19 points and five boards can be viewed below, courtesy Overtime.