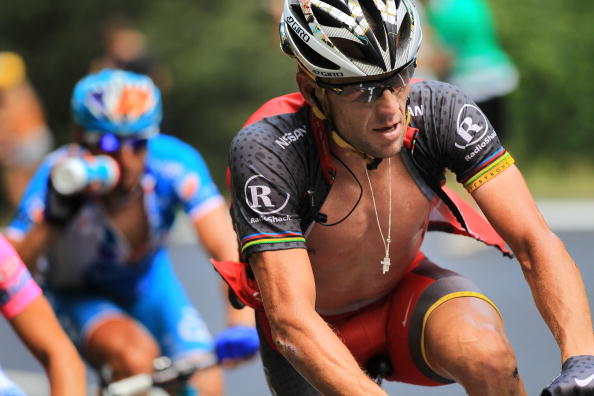 Lance Armstrong is still not over the fact that he got busted for using performance-enhancing drugs, which resulted in him having his entire empire ripped away from him. Now Armstrong is saying there was unjust punishment for his cheating compared to how Alex Rodriguez was treated after he was caught using PEDs.

The professional road racing cyclist was stripped of his seven Tour de France wins because he was caught using PEDs. Armstrong agreed to pay the Justice Department $5 million to settle a lawsuit where the U.S. Postal Service claimed that his cheating caused them to not get what they paid for when they sponsored his team during the Tour de France.

Armstrong alleges that there is a “double standard” for the harsh way that he was treated compared to how the public treated A-Rod. In a new interview on Today, Armstrong noted how he is still paying the consequences of using performance-enhancing drugs whereas fellow cheater A-Rod is largely beloved in his retirement and still receiving business opportunities.

“Alex Rodriguez didn’t raise half a billion dollars and try to save a bunch of people’s lives,” Armstrong said, referencing his Livestrong nonprofit organization that provides support for people battling cancer. “That’s kind of the irony of this. Look, it’s great when somebody hits home runs and maybe does an event here and there for the Girls and Boys Club. This story held a place in people’s hearts and minds that was way beyond those guys.” Of course another way to not be treated worse than a cheater is to not cheat yourself.

“The last 6 years, in a lot of ways, has really sucked.” Watch Lance Armstrong speak out to @andrewrsorkin about his rise, his fall and his hope for redemption pic.twitter.com/jauIEguPfJ

Rodriguez served a one-year suspension for his repeated PED use after he was exposed from the Biogenesis scandal. On August 5, 2013, MLB suspended Rodriguez from August 8 through the end of the 2014 season for violating the PED policy. Since retiring from baseball on August 12, 2016, A-Rod has been a special advisor to the New York Yankees as well as an analyst for ESPN and FOX Sports, plus he appeared on Shark Tank.

But it should be noted that A-Rod is not exactly beloved in New York City after his numerous playoff failures and opting out of his 10-year, $252 million contract with the Yankees in 2007, despite earlier saying he would not opt out. Rodriguez would sign a new mega 10-year, $275 million contract, which would see him suspended for PEDs during it and was so worthless in 2016 that the Yankees had to buy out the rest of his exorbitant contract.

Meanwhile, Armstrong has had to completely reinvent himself since he has been banished from the cycling world by doing podcasts. “The last 6 years, in a lot of ways, has really sucked,” the disgraced athlete told Andrew Sorkin. “I do think there’s a double standard. But I’m OK with it.” Narrator: “He is not OK with it.”

Lance Armstrong, who was banned from cycling back in 2012, also said that he is financially surviving only because he invested in Uber years ago. There is no law that states there can only be one asswipe cheating athlete at the same time, you’re allowed to have two at the same time.

RELATED: Bodybuilder Might Lose His Leg To Flesh-Eating Bacteria After Taking Bad Steroids