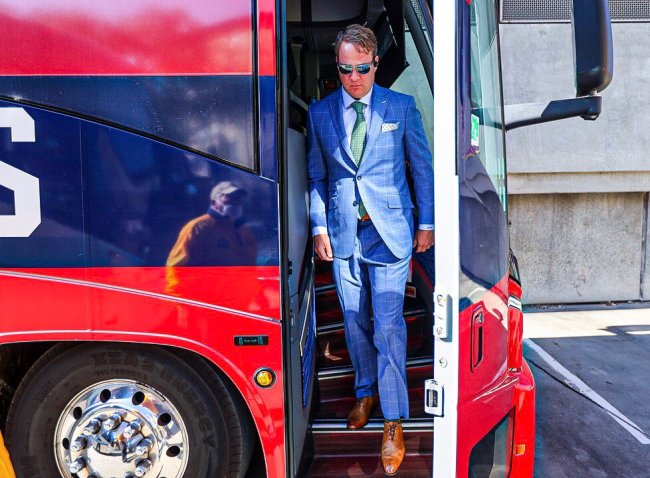 Lane Kiffin is all gas, no breaks. He took over the head coaching job at Ole Miss around this time last year and has been unapologetically himself, leading the Rebels to a better record in a 2020 conference-only schedule than a full season in 2019. Kiffin led his team into Baton Rouge on Saturday to face his good friend and former coaching counterpart at LSU. He and Ed Orgeron coached together under Pete Carroll at USC, Orgeron was Kiffin’s defensive coordinator at Tennessee, and Kiffin was slated to take the offensive coordinator job at LSU under Orgeron before he became the head coach at Florida Atlantic.

Prior to the game, he wore a suit with “Go To Hell Ole Miss,” a common saying in Oxford, on his collar. Savage.

It was a game full of storylines amidst a torrential downpour at Death Valley, and the game went off the rails in the second half. With a one-point lead midway through the fourth quarter, Ole Miss faced a 4th-and-goal from the two-yard-line. There wasn’t much hesitation regarding the decision to go for it.

Kiffin is a big proponent of analytics, which more than often suggest going for it on fourth down leads to more wins than kicking a field goal or punting. Of 60 fourth-down plays this season, Kiffin elected to kick or punt on 29— less than half. On this instance, he was particularly confident.

As the Rebels were lining up for the play, Kiffin walked back toward his sideline and signaled for a touchdown. Before the ball was even snapped, Kiffin knew it was good for six. It was.

LANE SIGNALED TOUCHDOWN BEFORE THE BALL WAS EVEN SNAPPED. pic.twitter.com/Kk5e40NMju

Kiffin has been known to celebrate touchdowns before his players cross the goal line. He went viral earlier this year when he chucked his clipboard into orbit.

Here he was during the 2015 Cotton Bowl while he was with Alabama.

Ole Miss will learn their bowl fate on Sunday.