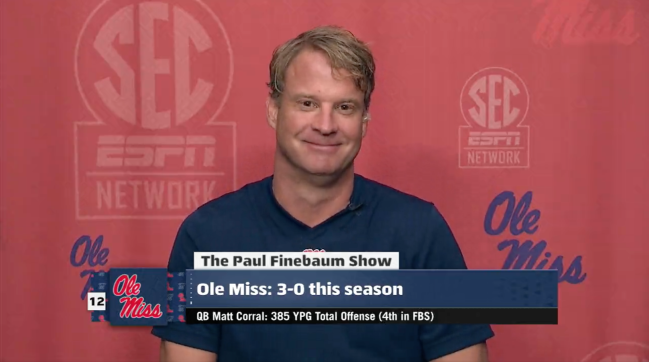 As Ole Miss travels to Alabama this weekend, there is a lot of hype surrounding Lane Kiffin and his Ole Miss Rebels. They gave the Crimson Tide a game last season and many people believe that this could be the year that they fall to their Mississippi opponents for the first time since 2015.

While discussing the matchup earlier this week, ESPN’s Mike Wilbon had a few thoughts.

He thinks that Alabama will win.

Not necessarily because it is the better team and not because Nick Saban’s assistants rarely lose to their former mentor, but because Kiffin is a “clown.”

Wilbon did not hold back on how he feels about the 46-year-old head coach and laid into him in an oddly personal, targeted rant. In response, Kiffin killed Wilbon with kindness and told him that he is praying for him.

Kiffin joined Paul Finebaum on SEC Network on Wednesday and discussed a variety of topics. Among them was Wilbon’s tirade.

In response, Kiffin took the opportunity to take shots back at Finebaum for the second time this year.

The entire exchange stems back to 2013 when Kiffin was famously fired on the tarmac after USC lost to Arizona State. Finebaum had made a comment about Kiffin before the game and it became a national storyline.

“How did someone like Lane Kiffin ever get these jobs?” Finebaum said. “How did he land the Raiders job? At Tennessee? And particularly the one at SC? People think it’s because of his father, Monte, the great defensive wizard. In some respects, Lane Kiffin is the Miley Cyrus of college football. He has very little talent, but we simply can’t take our eyes off him.”

Finebaum and Kiffin have since made up, and Finebaum apologized for his Miley Cyrus comparison, but Kiffin isn’t going to let him off that easily.

"I heard and I thought 'that guy Finebaum'd me!'"

Getting blasted on national TV this week was nothing new for Lane Kiffin…in fact it just felt like old times.

Will Kiffin be able to prove both Wilbon and 2013 Finebaum wrong on Saturday? Alabama and Ole Miss kickoff at 3:30pm ET on CBS.