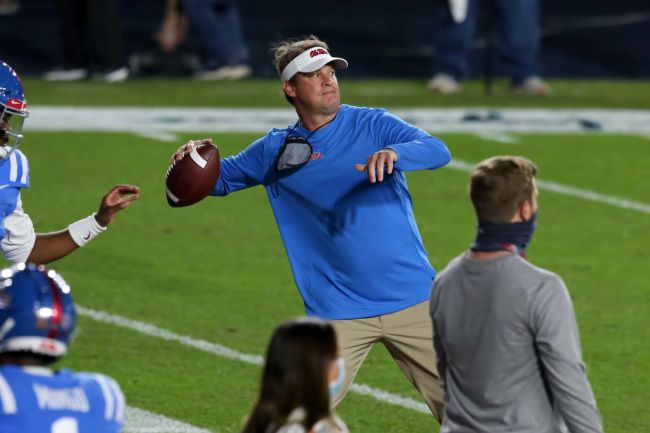 Lane Kiffin has Ole Miss rolling this year as the 3-0 Rebels rank 12th in the country behind an elite offense and Heisman Trophy favorite Matt Corral dominating thus far under center. This weekend, Kiffin and the Rebels will face their toughest test of the season with a road trip to Tuscaloosa to take on Alabama. ESPN’s Mike Wilbon doesn’t just have thoughts about the matchup, he has a rather bold opinion about Kiffin himself.

Nick Saban doesn’t lose to his former assistants, it just doesn’t happen, but many believe Ole Miss will roll into Alabama and give the Tide everything they want based on last season’s close game and just how good the Rebels have looked thus far.

Wilbon doesn’t seem to think any of that matters because he’s somehow come to the conclusion that Kiffin is just a clown. He called him that in a ridiculous rant during Tuesday’s edition of ‘Pardon The Interruption.’

Kiffin, being the very influential and active Twitter user he is, saw Wilbon’s comments and responded. He even hit Wilbon with the “I’ll pray for you” line, which is an extremely underrated comebacks.

And way to go out on a limp and pick the number one team in the country at home who is a huge favorite. How long did you watch film to come up with that surprise pick??? Really News worthy captain obvious. 😂 @PTI

Wilbon’s take is just drastically uninformed here, Kiffin has never been an “embarrassment” at any of his coaching stops.

Sure, he was fired rather quickly as the head coach of the Raiders, but he was also the youngest head coach in NFL history. Kiffin won 32 combined games over a four-year stretch at Tennessee and USC while simultaneously navigating NCAA sanctions. From there he convinced Saban to evolve his offense as the offensive coordinator at Alabama which he followed that up by taking over an abysmal FAU program and winning 26 games in three seasons.

Now, he has Ole Miss back in the national spotlight, and if the Rebels can pull off the upset against the Tide, we’re talking about a legitimate College Football Playoff team in Oxford.