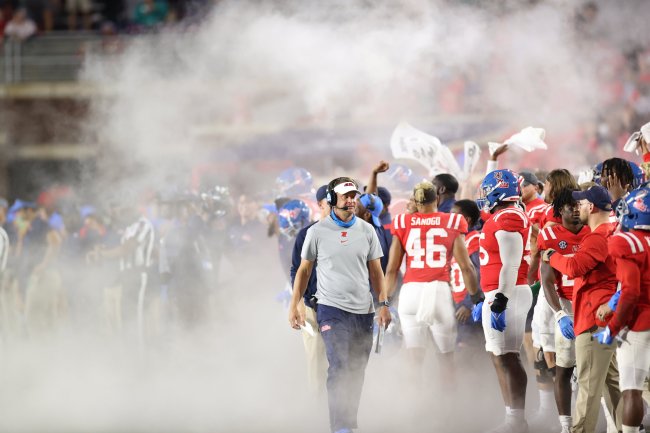 First-year South Carolina football coach Shane Beamer got his welcome to the Southeastern Conference on Saturday. The Gamecocks got beat down 40-13 by No. 3 Georgia in his first SEC game.

Lane Kiffin does not have any empathy for the loss.

His Ole Miss program, competing in the SEC West, has to face No. 1 Alabama year-in and year-out.

Beamer spoke with the media after the game and immediately started pointing out the discrepancies between his team and Georgia. He wasn’t making excuses, but he was certainly on the defense— no pun intended.

“They got like 100 5-star football players on their defense,” Beamer said, when asked what made Georgia’s defense so tough to face. “They have a defensive lineman that weighs 340 pounds that runs better than everybody on this call. They’ve got five-star defensive backs. They’re big, physical and fast. Other than that, they’re really freaking good.

“That’s why they have the top defense in the country. They’re hard to run the football on. So there wasn’t some magical scheme they came out with tonight. They got five-star recruits everywhere and they play really physical. Damn.”

After Beamer’s postgame comments went viral, Kiffin decided to respond with a question of his own. He made sure to note the fact that SEC West teams face the Crimson Tide, who are historically better than the Bulldogs.

Kiffin does not feel bad for the variance of talent between South Carolina and Georgia. That’s just life when you’re competing in the best conference in football.

Have you ever played @AlabamaFTBL ???? https://t.co/cPq2OSq2OB

As the head coach of South Carolina, Beamer will not have to deal with Alabama in the regular season until 2024, when the Gamecocks travel to Bryant-Denny Stadium. That meeting, of course, could come sooner if Beamer somehow brings his team to an SEC Championship Game or a College Football Playoff— but that’s extremely unlikely to happen in the next three years.

Beamer needs to come to grips with the reality of his job sooner than later. Georgia is always going to be Georgia, it’s about how his team can overcome the differences and win.