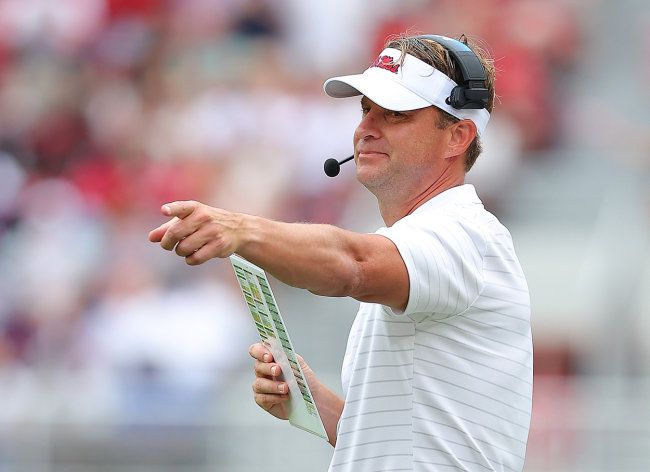 Ole Miss football entered a new era when it hired Lane Kiffin as head coach in December of 2019. The Rebels, after reaching College Football Playoff relevancy under Hugh Freeze, had tumbled into a ditch of irrelevance after being handed significant sanctions by the NCAA under Matt Luke — who was tasked with keeping the program from crumbling around him.

And then, after the unusual circumstances of a fake dog pee celebration, Luke was ousted and Ole Miss hired Kiffin from FAU.

Since he took over, the Rebels finished his first year with an Outback Bowl win over Top-15 Indiana and won the most regular season games in program history and reached a Sugar Bowl in year two. As Kiffin and Ole Miss look toward 2022, there are high expectations to continue the on-field success.

Meanwhile, the program has done a fantastic job in recruiting. While the Rebels have not signed the top-ranked recruiting class of all-time after going 8-4 like the Aggies in College Station, that has been intentional. Kiffin has put a significant emphasis on the transfer portal and has cleaned-up over the last two years.

But that doesn’t mean that Ole Miss has backed off of the high schoolers. In fact, according to a top-ranked recruit in the Class of 2023, it is the opposite.

Cook, who is considered one of the top players at his position in this class, released his Top-7 back in December. Ole Miss was on the list alongside Texas, Texas A&M, Alabama, Clemson, Ohio State and LSU.

Although his recruitment remains open, the general consensus is that Texas and Alabama are leading the pack. However, there are a lot of programs still in the mix and Ole Miss is one of them.

Cook was scheduled to visit Florida next weekend, but announced on Wednesday night that he changed his mind. Instead of traveling to Gainesville, he is headed to Oxford.

In a conversation with On3 Sports, Cook expressed that he is giving his time and attention to programs and coaches that make it very clear how much they want him. He said that Kiffin is among those that are in constant communication to the point that he won’t go away. Cook said that is good recruiting.