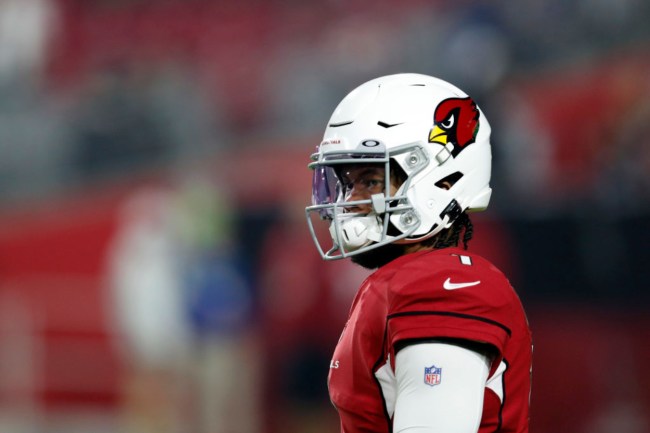 The drama in Arizona between Kyler Murray and the Cardinals seemed to be cooling off. Then, he and his agent decided to release a statement about wanting more money, and now the drama is back to an all-time high.

Larry Fitzgerald Sr. doesn’t like what he’s seeing out of Murray and elected to go on Twitter and trash the quarterback calling him “spoiled.” Fitzgerald Sr. could start using commas in his harsh tweets to make life easier for everyone, but we get the gist.

He’s spoiled brings his Oklahoma offense to the NFL team has to catch up great talent.He’s never been humbled keep working.

Fitzgerald Sr. isn’t the only person to call out Murray after all the drama that’s taken place over the past handful of weeks.

Four days later, the Cardinals made a move of their own on Instagram. They deleted all but two photos on their page, with the only two left being pictures of Murray. He later addressed the “nonsense” going on in the social media world, but shortly thereafter released the letter.

The statement, which was released by Murray’s agent Erik Burkhardt, says they sent a ‘detailed contract proposal’ to the team and they want improvements across the board.

“Actions speak much louder than words in this volatile business,” the letter reads in part before stating “it is now simply up to the Cardinals to decide if they prioritize their rapidly improving, 24-year-old, already 2x Pro Bowl QB, who led the organization from 3 wins before his arrival to 11-wins and their first playoff appearance in 5 years.”

Murray calling the franchise out publicly is a bold strategy. Sure, he deserves a new contract, but he’s burning bridges and only losing fans in the process.