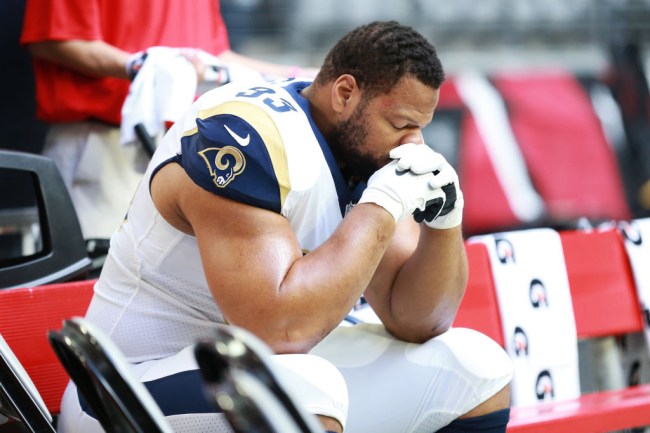 Ndamukong Suh and sportsmanship go together like toothpaste and orange juice. Through the first four years of his career (2010-2014), the 31-year-old defensive tackle had been fined eight times by the NFL for a total of $255,375. During Sunday’s Rams 31-9 drubbing over the Cardinals, Suh sparked some controversy once again by seemingly try to claw out Larry Fitzgerald’s eye.

The clip has been posted to Twitter and has since amassed thousands of retweets, with many fans calling for the five-time Pro Bowler to be fined and suspended. Especially for trying to injure one of the NFL’s most well-respected players.

ABSOLUTELY DISGUSTING… KICK HIM OUT OF THE LEAGUE! 😡😡😡https://t.co/nJDwQG6r9M

If the NFL doesn't ban Ndamukong Suh for blatantly poking Larry Fitzergald in the eye after a play I'm seriously going to boycott the NFL.

Why Larry Fitzgerald of all people? He's the nicest human being on the planet.

They need to kick that loser out of the league. Absolute TRASH!

Welp, in an interesting turn of events, Fitzgerald, the victim, defended “his friend” Suh in a Twitter post.

Wanted to address the video circulating from Sunday: I’ve known @NdamukongSuh since his college days and he’s a close friend of mine. Quality as a person matches his quality as a player.

That video is just a friend clowning with another friend. No negative intent! It's all love

So classy. So on brand for Fitz to extend Suh the courtesy he didn’t deserve.

You’re the most respectable athlete to ever play sports

Boys will be boys I guess.