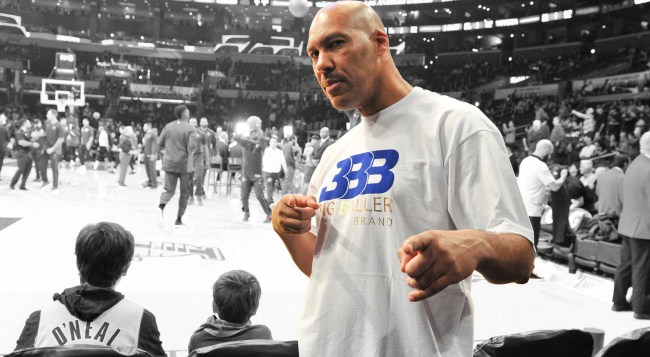 Did you know that there is a recently published biography available on the life and times of one LaVar Ball? Because I didn’t. But damn, I am now going to read the hell out of that thing.

It’s called We Ballin’: What I Learned From LaVar Ball About Basketball, Business, and Bravado. The book was written by Marissa Mitchell, who grew up down the street from the Ball family in Chino Hills, California.

According to For The Win, who interviewed Mitchell about the book, LaVar “became her personal basketball trainer when she was 12” and she often played with his kids.

She’s no dummy either. Mitchell was valedictorian of her high school and earned degrees from both USC and UCLA. It was after graduating college and becoming an English teacher that she asked LaVar if she could write his biography and he agreed. However, as she was trying to put the book together she became sidetracked with her work as a customer service rep and a publicist for Ball’s Big Baller Brand.

In 2017, Mitchell was fired from BBB after not being paid what she says she was promised, and suddenly the LaVar Ball biography she was writing became “unauthorized.”

Some excerpts from Mitchell’s interview with For The Win…

What changed those circumstances to make the biography “unauthorized?”

Well, what happened — I began interviewing him. I did this in my spare time. I was a full-time teacher. As the months went by, as I gathered more interviews and materials for the book, which really was coming together nicely, I was becoming more and more impressed with LaVar. Someone who came on – his manager [Alan Foster] – asked me to take on more responsibilities. At first, it started with building a website and doing some Adobe Photoshop, managing the website, doing customer service. And then, finally, functioning as a publicist.

When that happened, the dynamics definitely changed. The book was not a priority. It turned out that it didn’t exactly work out. I was promised pay. Like, retroactively. Verbal promises. Of course, I debated if I should do this, but because I felt so close to LaVar and his family, when I brought it up, it wasn’t exactly embraced. I kind of just took him (Foster) at his word, and as time came to sign a contract for the publicist part – not even for the book part – the manager, he let me go without pay, saying my services were no longer needed. This was after about five or six months of full-time work. I had actually put myself on leave from teaching, and that’s kind of what happened. And the book ended up not going through in that certain way.
…
How did LaVar change from when you initially knew him to who he is today?

What I saw was an exaggeration of certain aspects of his personality. I don’t think LaVar is bad. I think he’s neither good nor bad. He is emblematic in a way.

At first, it was all about simplicity. Getting his sons to be successful as athletes, which I admired. And then, as Big Baller Brand unfolded, what I thought was changing the course of collegiate and professional sports to be more equitable for everyone involved. What changed seemed to be as the money and the power and the notoriety and the talk and the free stuff, it all came pouring in. There was an exaggeration on his part. LaVar had always talked a big talk, but it was now amplified to the Nth degree … He felt the power, and he really went with that feeling. That was more of what happened more than anything else. It felt like at the end, it wasn’t about the good intentions or the simplicity or even his sons. Again, he loves his sons very much, but it all became a little bit more about, “How far can we go?”

When asked about Ball’s JBA league having problems paying its players and Big Baller Brand’s poor business practices, Mitchell said it was all true, calling BBB “a kind of cut-corners, save-costs, the-customer-is-at-fault sort of operation.”

“It was very disheartening as their sole customer service representative for a while to tell customers that, in essence, there was nothing that we could do or that they were going to have to pay a little extra to get the right product,” she added.

Mitchell also discussed how she started the process of writing the book, what kind of story she was hoping to tell, how getting fired from LaVar’s company affected her decision to continue with the book, what LaVar would say to her now, and more.

Check out Andrew Joseph’s entire fascinating interview over at For The Win.