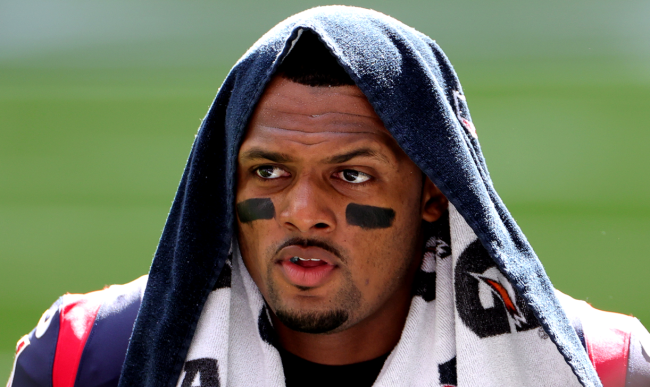 The lawyers on each side of the ongoing Deshaun Watson sexual assault lawsuits are publicly at odds over whether or not any of Watson’s accusers have reached out for a settlement.

In those documents, Hardin claimed that five accusers had told others they were trying to get money out of Watson.

This week, Hardin doubled down, saying, “While we have never approached Mr. Buzbee about a settlement, he has approached us on numerous occasions in the past about the possibility of a settlement.

“We have made clear all along that there would be no settlement unless the terms are made public and all participants are allowed to speak in their own defense at all times.

“We want none of the participants – the plaintiffs or Mr. Watson – muzzled by a settlement agreement. Mr. Buzbee does not feel the same.”

Related: Deshaun Watson’s Girlfriend Jilly Anais Has A Pretty Clear Message For All His Haters

The attorney representing the 22 women who have filed suit against Deshaun Watson, Tony Buzbee, fired back, loudly, denying Hardin’s claims of his seeking settlements.

Writing on Instagram alongside an image of the first page of a non-disclosure agreement, Buzbee stated, “Not that many care about it anymore. But there is a thing called ‘justice.’ And we will find it.

“Contrary to what Mr. Rusty says, we haven’t ‘approached them to settle,’ ever. When they approached us they insisted we sign this. We obviously didn’t reach out to them; they begged us via the Texans to mediate.

“We hold the cards. The truth sometimes or most of the time hurts!!!! We approached them?!? My ass.”

When reached by phone Wednesday night Houston attorney Tony Buzbee, who represents 22 women who have filed civil lawsuits against Texans QB Deshaun Watson, confirmed that four of his clients have met with the NFL’s lead investigator, Lisa Friel, and eight to ten of his clients… pic.twitter.com/VgO8lzH2Sg

Buzbee added that he and other members of his staff attended the first three sessions with the NFL, and that that Houston Police Department “has been perfect” in its handling of the cases against Watson.