LeBron James Shares The One NBA Finals Loss That Still Pisses Him Off (And, No, It’s NOT That J.R. Smith One) 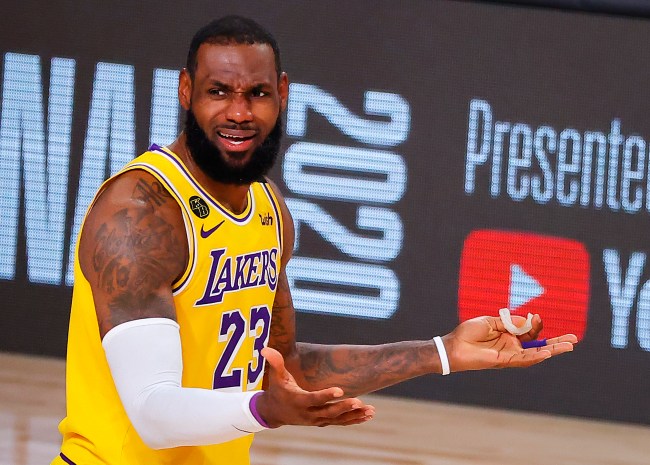 Say what you want to about LeBron James, but with the dude playing in his ninth NBA Finals in the past 10 years, the three-time champ sure does put his team in position to win titles. And the fact that James has done this with three different franchises (Miami Heat, Cleveland Cavs, Los Angeles Lakers) and a variety of different teammates/coaches, well, it’s all the more impressive.

As much as LeBron James has played in the NBA Finals in his career — going to the championship series 10 times total and playing in 50 career NBA Finals games — it’s only natural that he’s had his fair share of good, bad and forgettable moments during those series.

Like, his first title in 2012 with the Heat? Absolutely sweet. His third title with the Cavs? Probably the one that’s most meaningful, as he delivered his promise to his native Northeast Ohio. Along the way, though, James has had plenty of moments that he’d rather forget — and he just revealed the one NBA Finals loss that still pisses him off to this day.

Talking to the media following his team’s Game 1 win over the Heat in this year’s Finals, LeBron chatted about some of his experiences playing in the championship series. After his team let up against Miami Wednesday night after once leading by 32 points, James was quick to relate the lost intensity to a previous Finals game; which still haunts him to this day.

LeBron on the Mavericks' Game 2 comeback in the 2011 NBA Finals pic.twitter.com/lCPaUoUTNc

“One game in particular that always hits home for me is Game 2 of the 2011 Finals,” James said. “D-Wade hits a three right by Dallas’ bench to put us up 13 or 17 points, and from that moment on Dallas went on a hell of a run that finished off with a Dirk Nowitzki layup to steal the game. That s–t burns me to this day.”

For those unfamiliar or forgetting the game LeBron James is talking about, take a look below at the Dallas comeback that very well played a part in Bron losing that NBA Finals series against the Mavericks.

The 4th quarter Mavericks comeback in game 2 of the 2011 NBA Finals. pic.twitter.com/8p6J1OhXGq

Now, I don’t want to call LeBron James a liar — because losing in this kind of fashion when being up big is a disheartening feeling — but, shit, does he forget about the epic fail from J.R. Smith during Game 1 of the 2018 NBA Finals? As a Cavs fan, I sure as hell don’t. To this day, I still have no clue what in the hell Smith was thinking.

You almost have to feel bad for the guy with that level of ineptitude around him in a finals game. Almost. pic.twitter.com/ZclC1JtRq2

Then again, Smith’s currently on the Lakers and LeBron is next level calculated, so I’m sure he knew not to bring up some bad memory that could impact his current teammate for this year’s NBA Finals. But, c’mon, there’s no way the Mavs loss outweighs the pain of dropping 51 on the road against the Golden State Warriors and coming away on the wrong side of victory in that kind of fashion.