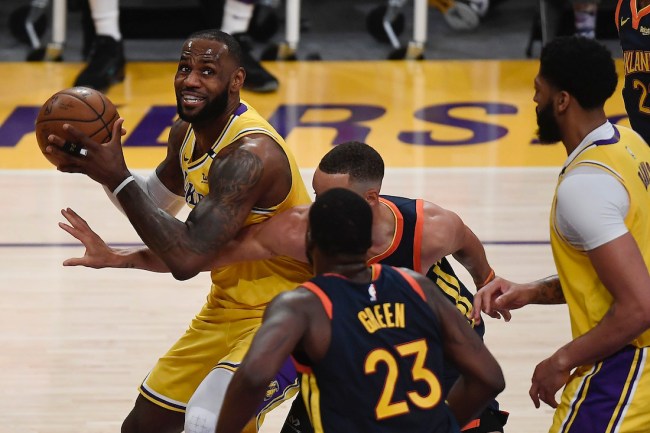 After LeBron James helped guide the Los Angeles Lakers overcome a 13-point halftime deficit to defeat the Golden State Warriors in the NBA Playoffs’ Play-In Game, there’s been a lot of talk about the continued growing legacy of the hoops legend. Despite a rocky season following his fourth career title last season, James had never been so questioned entering a postseason before, with everyone wondering if his latest ankle injury and Father Time might just be catching up with him.

While winning the Play-In Game against a less-talented Warriors team doesn’t silence those doubters, for now, James has his Lakers as favorites as the 7-seed in the Western Conference, with no team in the NBA Playoffs looking forward to matching up against the defending champs.

However, if there were any questions about whether or not LeBron James still has the capability of putting a team on his back and carrying them to victory, well, the win over the Warriors proved he still has the “it” factor. And, according to ESPN’s Dave McMenamin, just a little trash-talk from a couple of Golden State bench players was enough to trigger LeBron into taking over the game — and, ultimately, hitting the game-winner.

New video: Juan Toscano-Anderson and Jordan Poole helped get LeBron James and Anthony Davis going with their trash talk on Wednesday, adding intrigue to an already intense play-in game between the Lakers and Warriors. My mini essay for @sportscenter pic.twitter.com/hbd4gq8oZ9

Now, look, if you’re a Lakers fan, you love hearing about how LeBron James took the trash-talk from Warriors bench players and turned it into motivation and made him flip that switch on. But, at the same time, it’s a little concerning that Golden State was outplaying L.A. on the Lakers’ home floor in a do-or-die postseason game, and that James and his teammates had to use so much energy just to punch their ticket into the bracket round.

There’s a lot of pressure on James and the Lakers in these NBA Playoffs, so good on them to avoid embarrassment with the win over the Warriors in the Play-In Game. But that it took trash-talk from two young guys like Jordan Poole and Juan Toscano-Anderson to wake up the team’s best star should be a concern, and isn’t something the Lakers can really rely on happening as they move on to take on the Phoenix Suns.

But there’s no denying LeBron James still has that chip on his shoulder and the drive to carry the Lakers deep into the postseason. He and his teammates will need to bring that type of energy from the jump if they want to repeat as champions, though, which, if it happens, could lead James into the GOAT title once and for all.