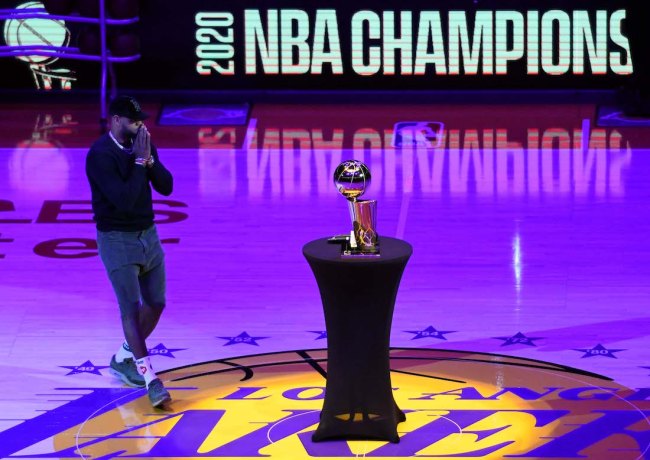 Charles Barkley often weighs in on all things basketball, with the Hall of Famer and current TNT analyst paid to do so. While Sir Charles sometimes says some outlandish things — but always delivers his opinions in an entertaining way — he mentioned something on Get Up Thursday morning that is 100 percent accurate: LeBron James should seriously be considered as the NBA’s GOAT over Michael Jordan with an NBA title this season.

While reacting to James’ heroic effort during the Lakers-Warriors NBA Playoffs play-in game Wednesday night — one that, personally, had me betting against LeBron for the first time in over a decade — Barkley dropped a bold proclamation about the ongoing GOAT debate. Take a listen below.

If LeBron wins the title this year, Charles Barkley believes it will be time to "have a serious conversation" about whether or not he's the GOAT over Michael Jordan 🐐 pic.twitter.com/m1XiXrnj3L

It’s funny how just one performance can change an entire narrative, but after seeing what LeBron James did against the Warriors during the NBA’s play-in game — leading the Lakers to a win after trailing by as many as 13 — it’s clear the four-time champ is still more than capable of being the best player in the league right now.

For argument’s sake, let’s breakdown Barkley’s bold statement, highlighting some of the reasons why James is the GOAT with an NBA title this season.

Now, of course, it’s easy to slam Charles Barkley’s opinion about LeBron James overtaking Michael Jordan as the GOAT because of one very simple stat: MJ was a perfect 6-0 in his NBA Finals’ career, going through the likes of Magic Johnson, Clyde Drexler, Barkley himself, Gary Payton, Karl Malone, and John Stockton, among other all-time greats. This is always the baseline for MJ being considered the greatest ever — and has, generally, held precedent in an argument.

But if LeBron James can carry this Lakers team to an NBA championship this season, it will be nothing short of remarkable.

And should L.A. reach the NBA Finals to give James 10 appearances in the past 11 seasons, it will be the second-most dominant decade ever witnessed in league history, trailing only Bill Russell’s eight-straight NBA titles from 1959-66. When you’re talking about multi-decade type of accomplishments like that, it’s noteworthy.

This is, arguably, the most trying season LeBron James has ever experienced in his illustrious career. He’s been doubted more than ever. His team isn’t nearly as talented as his teams in the past. He’s now an underdog.

He’s still standing and still delivering, though. And, despite the efforts to write James off, he’s still carrying his team to dramatic victories in the NBA Playoffs. Should he do it all the way to an NBA title this season, Charles Barkley’s right in thinking it’s time to recognize LeBron has the GOAT. End of debate.