Even With LeBron James, The Lakers Have A Better Shot Losing Play-In Game Than Repeating As NBA Champs 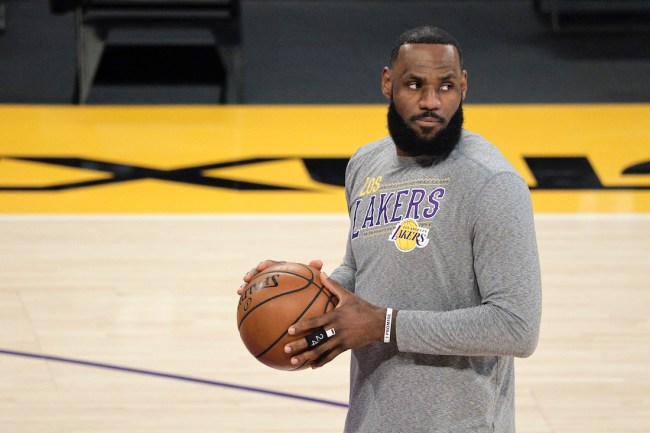 As the Lakers prepare for the NBA Playoffs’ play-in game against the Warriors, I couldn’t help but think about a cruel reality: This is the first time in about a decade that I’m betting against a LeBron James-led team.

From his days on the Miami Heat, to his return to the Cleveland Cavaliers and now with his current Lakers squad, James has proven to be the game’s most lethal weapon. No, he hasn’t won every single NBA title over the past 10 years, but he has played in all but one of the NBA Finals during the span, earning four championships in that timeframe. That’s enough to support the thought that he’s still the game’s best player when healthy, and that he’s still got a gear that other players don’t possess.

But the 2021 NBA Playoffs are going to be different.

Unlike in years past, don’t expect James to carry the weight and drag the Lakers to the NBA Finals. He doesn’t have the strength this year. He doesn’t have the talent on the roster. He doesn’t have his own health. He doesn’t even have a great matchup in the play-in game, as the Warriors present a difficult challenge to try and beat. That’s why L.A. has a better chance at losing the game against Golden State and, possibly, falling out of the postseason before the drama really begins.

As we all know, Steph Curry and LeBron have had an epic rivalry over the past half-decade, with both trying their best to claim the title as the player of the 2010s. From their head-to-head matchups in four NBA Finals during that timeframe to the respect each shows one another, hoops fans should be pumped about the Lakers-Warriors play-in matchup. And, just like three of those four Finals’ showdowns, expect the sharpshooting Curry to get the best of a James-led team.

So why should we all expect the Lakers to lose to the Warriors and possibly be bounced from the NBA Playoffs? Simply put, LeBron James isn’t going to be the best player on the floor against Golden State.

Regardless of James putting up a triple-double and getting the necessary help from teammates like Anthony Davis, the Lakers don’t have Steph Curry, a guy who’s as cold-blooded as any superstar has ever been. He’s able to hit any shot from anywhere on the floor. He’s the best shooter in NBA history. He’s capable of dropping 60. James used to be able to do that, but not anymore.

Making matters worse is that Golden State seems to be clicking at the right time as the Lakers continue to find their chemistry. I hate using that word — especially with a James-led squad — but the fact that the Lakers went just 12-15 with LeBron off the floor is telling, and goes to show they may not have the talent to get past the Warriors.

On the flip side, Golden State has gone 16-9 since April 1 — and entering the postseason winning eight of nine — with Steph averaging 37.1 points and 5.0 assists while shooting 43.7 percent from behind the three-point land in 23 of those 25 games. Those are absolutely absurd numbers. Add in the Dubs having a walking triple-double (Draymond Green), and some solid complementary pieces, and, well, the Warriors seem like the favorites heading into the play-in matchup with the Lakers.

Not long ago, LeBron James terrorized opponents because of his sheer stature. He has an aura about him, especially in the NBA Playoffs, that can’t be ignored. And, when healthy, he’s still as dominant as any player in the league.

But Steph Curry is everything that and more right now. And with the Lakers-Warriors matching up in the play-in game this week, it’s Golden State with the better roster.

LeBron James and the Lakers should be dangerous again next season. However, in this matchup against this Curry-led Warriors team, they enter as underdogs, so it shouldn’t surprise anybody if they have a better shot at losing and getting eliminated from the NBA Playoffs than repeating as champs again this year.