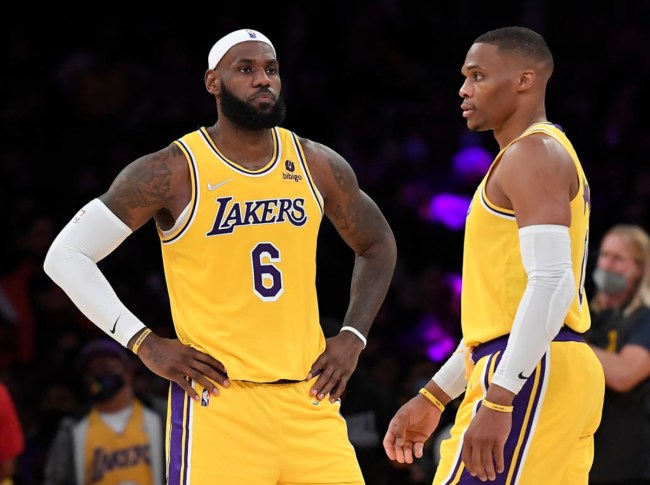 Things have been spiraling in Laker land for quite some time now, but with the fourth quarter benching of Russell Westbrook against the Pacers on Wednesday night, things could be well beyond repair in Los Angeles.

The fact that LeBron James didn’t want to talk about Westbrook being benched is also a major sign that things are extremely unwell within the Lakers’ locker room.

Westbrook hasn’t played anywhere close to the level of his $44 million salary at all this season. Things have particularly been bad since the calendar flipped to 2022, and it all came to a head on Wednesday night.

Head coach Frank Vogel saw enough out of Westbrook and his 5-for-17 shooting against Indiana and sat him down. He offered a straightforward explanation as to why he decided to sit the nine-time All-Star.

“I was playing the guys that I thought were going to win the game,” Vogel explained.

LeBron Wants No Part In Talking About Westbrook Being Benched

While Vogel carries the title of head coach for the Lakers, it’s no secret that James has a huge impact on everything that goes on within the organization. He was asked about Westbrook being benched and completely avoided the question claiming he and his wife were running late to a movie.

"I'm going to the movies with my wife, man. I gotta go." — LeBron James when pressed about Frank Vogel benching Russell Westbrook down the stretch and wanting to wrap up his postgame press conference. #Lakers #LakeShow

James’ lack of comment about the Westbrook situation comes just a few days after he publically apologized to Lakers fans for how bad they’ve been this season.

#LakerNation I apologize and I promise we’ll be better! 👑💜💛

The Lakers are now 22-23 on the year, and while it would be wrong to suggest James is checked out already given how great he’s been all year, he’s clearly done with talking about the mess that is the LA roster.

NBA fans were critical of LeBron ducking the question about Westbrook being benched:

Dude is a clown what happened to this???? https://t.co/OR1NT1XW5g pic.twitter.com/4noCrktMnX

LeBron is going to send Pelinka a text from the movies "blow it up" https://t.co/Rfv3J0Ritv

i thought we were supposed to keep the same narrative energy https://t.co/NRYT6TRDQc pic.twitter.com/hDq3eHRAop