If LeBron James And Steph Curry Team Up At Some Point, Every NBA Fan Should Feel Lied To 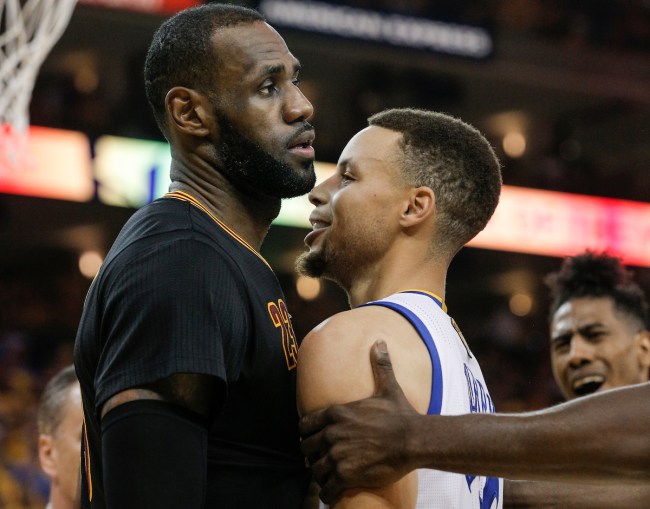 When most NBA fans think of LeBron James and Steph Curry, there are probably two things that immediately pop into their heads. First, that both are, arguably, the two best players of their generation. And, second, that the two went toe-to-toe in four-straight NBA Finals’ from 2015-2018, with Curry’s Golden State Warriors getting the best of James’ Cleveland Cavs in three of those matchups.

But something funny has happened between James and Curry since those championship matchups years ago — and no NBA fan should be laughing — because, suddenly, LeBron and Steph appear to be… buddies.

Any hoops fan that watched the NBA All-Star Game saw LeBron James and Steph Curry laughing, enjoying themselves and having fun with one another. It’s an exhibition game, so that’s expected. Problem is, while these two should respect one another, it’s disgusting to see the two be all buddy-buddy. You think Magic Johnson and Larry Bird did this? Or Michael Jordan and Karl Malone? Or Kobe Bryant and Paul Pierce? Sure, it happened behind the scenes, but not on the basketball court.

Things were so cordial between James and Curry that ESPN’s Kendrick Perkins and the aforementioned Pierce even discussed whether or not the two former league MVPs would (gulp) become teammates at some point in the future. Here’s a segment from a recent episode of The Jump with the analysts both agreeing it’s a real possibility.

“Yeah, I wouldn’t be surprised either,” responded Pierce.

“Come on both of you, I do not see Steph Curry joining up with LeBron and the Lakers,” responded host Rachel Nichols.

Sure, Rachel Nichols tries to stop the madness, but, given where the NBA is at this point, would anybody really be surprised if LeBron James and Steph Curry actually teamed up in the near future? Probably not. This is the way of the league now. It’s awful.

The rivalry between James and Curry during those four-straight NBA Finals’ was incredible. It was intense. It was all-time kind of stuff. They’ve always respected one another — that’s part of what it means to be an all-timer, you win and lose with class. But, deep down, they wanted to beat one another’s brains in, knowing that one was trying to prevent the other from adding to his legacy. If they teamed up, all of the battles and trash-talking and competitive hatred of years past would feel fake.

Maybe I’m old school and prefer sports icons like LeBron James and Steph Curry stay on opposite sides of the line. That they continue to compete against one another because they both have so much pride that they’d never want to team up. That’s how sports fans all think it’s supposed to be. Unfortunately, that’s not what always happens.

When LeBron selected Steph in the NBA All-Star Game, it personally pissed me off. It shouldn’t have happened. It was as if The Hatfields and The McCoys decided to have a party and forget about all the years of feuding. And if James and Curry do end up becoming teammates at some point in the future, it’d be a clear sign that the NBA is no longer “Fantastic,” but, instead, completely wack.