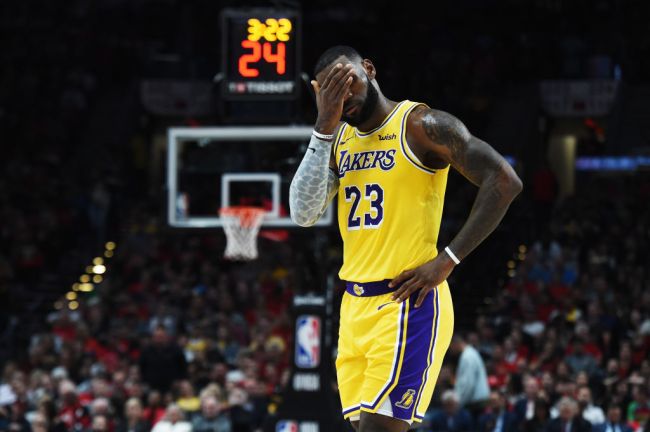 Superstars in the NBA get special treatment from the officials and players travel multiple times a game without ever being called for it. Those are two statements you literally can not argue with, they are facts. So, with that being said, not a single fan of the NBA should be shocked or outraged at the fact that LeBron James got away with an egregious travel against the Nuggets on Sunday.

Just before halftime, James took the inbound pass under his own basket and somehow got all the way down to the other end of the floor by taking just two dribbles en route to a dunk before the buzzer. He picked up his dribble well before the three-point line, took three very long strides, and hammered it home without being called for a walk.

There isn’t a single referee in the NBA that would have called a travel on James there, even if it very clearly was. It was a highlight-reel dunk at the buzzer, an official isn’t going to blow the whistle there.

Kevin Durant, Anthony Davis, Zion Williamson, or any other big-time player in the league would’ve gotten away with the travel there as well, but with it being LeBron, who has a long history of getting away with walking, it’s a bit tougher for some fans to swallow.

We can’t forget James literally picking up the ball against the Jazz back in 2019 and taking three steps with an official staring directly at him and getting away with it. I think everyone can forgive the refs for not calling him for a travel on the dunk against Denver, but this no-call against Utah is unforgivable.

If you don’t think James gets away with traveling all the time, here’s a compilation of him not being whistled. The video is over six minutes long and was published in 2018, it’s fair to assume he’s added plenty of new highlights worthy to be added to the compilation by now.