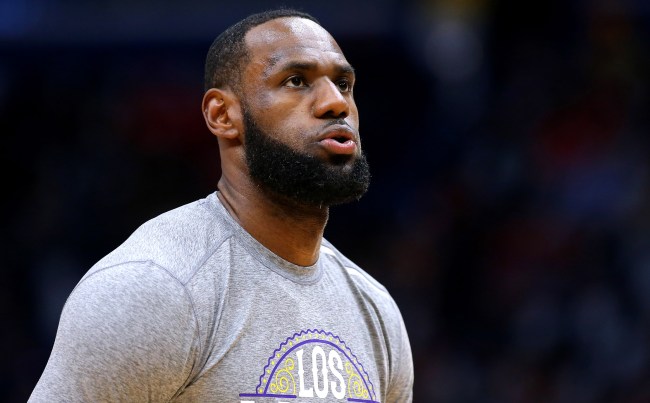 LeBron James is in his 16th year in the NBA. 16th! He’s played in around 1,200 regular season games. And yet, he only just turned 35-years-old in December, so if he wants to he can still keep playing for several more years.

Heck, he’s having arguably the best season of his career averaging 25.5 points, 10.6 assists and 7.8 rebounds per game this year for the first place Lakers. Bro isn’t getting old, he’s just hitting his prime.

Just don’t tell that to his kids, or the NBA rookies who hung out with them over the summer.

When asked for his reaction to the realization that players like Ja Morant, 20, and his son Bronny, 15, are actually not that far apart in age, James answered, “I don’t think about it because this summer I had [NBA rookies] Darius Garland and Darius Bazley, and all those guys over to my house, you know, throughout the summertime. And when they would come over to the house, they would actually be outside playing basketball with Bryce and Bronny. Or playing video games with them. At first I was like [surprised] and then I had to realize those guys are 17, 18-years old and my sons are 15 and 13. So, yeah, it made all the sense in the world.”

“My wife was… [LeBron chuckles]… I’m not going to say which one said it, but one of them said when they was leaving, ‘Thank you, Auntie Savannah.’ She didn’t particularly like that… [more laughing]… but it was a respect factor. She didn’t like that because you know, my wife, she’s been 21 for the last 20 years.

“So, but it’s a respect factor and we both sat back and kind of laughed at it after the fact, like, ‘Oh wow, they’re around… they understand with my sons than actually with us so it was pretty cool.”

These rookies have @KingJames and Savannah feeling old 😂 pic.twitter.com/JoT6wdRA9v