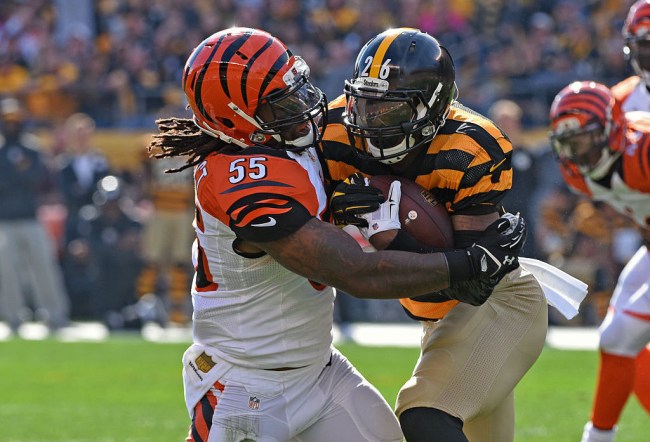 Vontaze Burfict has earned quite the reputation over the course of his career for being a gigantic piece of shit who seems to take enjoyment in trying to end the careers of his fellow competitors, and last weekend, he cemented his status as the dirtiest player in the NFL thanks to an egregious helmet-to-helmet hit on Jack Doyle.

The linebacker would finally get his comeuppance when the league decided to suspend him for the rest of the season, and while both Derek Carr and (of course) Bill Romanowski disagreed with the decision, virtually everyone else on the planet was glad to see justice was finally served.

Burfict has sidelined a number of players during his time in the NFL—including Le’Veon Bell, who saw his season end in 2015 after he was at the receiving end of a low hit as he attempted to head out of bounds.

Bell has previously criticized Burfict for his wanton brutality, and according to Yahoo Sports, he recently chatted with 17 Weeks and didn’t hold back when expressing his displeasure:

“There’s certain fine lines you really can’t cross and I feel like he kind of finds it every game. It’s like unbelievable.

The league did what it did. I’m glad they’re finally trying to bite down on things like that because we don’t want dirty players in the league.

Burfict is currently appealing his latest in a long line of suspensions because of course he is but here’s to hoping the NFL doesn’t back down.