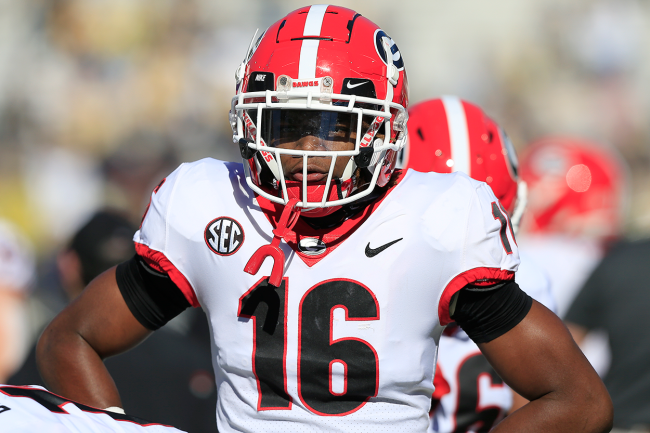 With the No. 32 overall pick in the 2022 NFL Draft, the Minnesota Vikings selected Lewis Cine. The 22-year-old safety became the fifth Georgia defender drafted in the first round, and was part of a historically large draft class for the Bulldogs.

Cine and his teammates’ selections came after winning the College Football Playoff National Championship in January. Backed by what could be considered the greatest defense in college football history, Georgia only lost one game all year.

While the defensive unit was undeniably dominant, Cine recently made a bold claim about the Bulldogs’ offense, which out-scored opponents by an average of 28 points per game in 2021. In doing so, the Texas-native took a play directly out of Alabama’s playbook.

During an appearance on the Richard Sherman Podcast, Cine spoke about his experience in Athens.

Lewis Cine said that while he was at Georgia, football practices against his own team were harder than games against live opponents.

That, of course, speaks rather loudly considering that the Bulldogs play in the Southeastern Conference, the best in football.

Live games are NOTHIN’ for them Dawgs ⛓ pic.twitter.com/ryaR9FAqya

That is how Cine sees thing through his eyes. It may not be entirely true, considering that Georgia did lose a game last season, but the national championship speaks for itself to a certain extent.

While Cine’s comment is rather pronounced, he is not the first player to say something of that nature. In fact, it directly correlates to something said by Alabama running back Josh Jacobs in 2020.

The rest of the SEC probably will not appreciate this take. @iAM_JoshJacobs pic.twitter.com/NVXNRF1LyG

When Jacobs made the same comment about practice at Alabama, it was during the peak of the Crimson Tide’s dominance. Is it Georgia’s turn to claim the title of most difficult practice in the country or is Cine just stirring the pot.

Either way, Cine is off to the NFL, where practice will be taken up another notch. By all accounts, the Vikings rookie is a stand-up guy and a fantastic teammate with a great head on his shoulders and a lot of heart.

But maybe, just maybe, he put a target on his back for other SEC players in the league to look his direction and welcome him into the league?