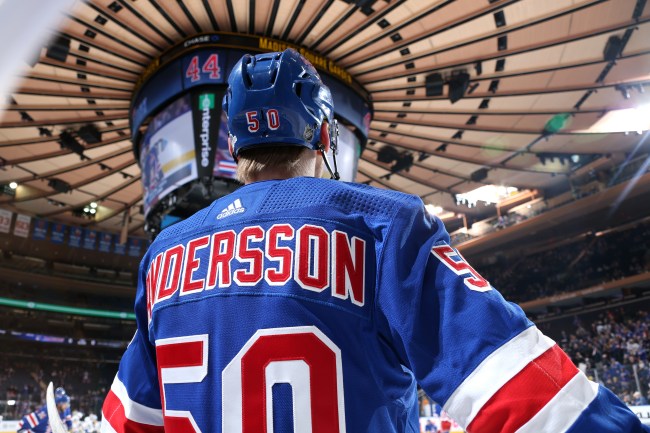 In 2017, the New York Rangers selected Swedish forward Lias Andersson seventh overall in the Draft, the highest first round pick for the Rangers in 13 years.

The Rangers then sent fans into a tizzy when they sent the 20-year-old down to Hartford and put more stock in their second first round pick, Filip Chytil, who had a successful rookie campaign, scoring 11 goals and 23 points in 75 games.

Andersson would eventually play in 42 games for the Rangers last season, scoring just two goals and adding four assists, but everyone in the Rangers organization is expecting more this season from a young player with limitless potential who had an outstanding preseason.

Welp, the Rangers kicked off their 2019-2020 season last night at Madison Square Garden against the Winnipeg Jets and Andersson made a huge oopsie in front of thousands of screaming fans the second he hit the ice for introductions.

Tough start to the season for Lias Andersson pic.twitter.com/y8AwIH9Nkg

Of course, nothing trips up the internet. Keyboard warriors always demand perfection.

Who wins in a fight?

Lias Andersson trips and skids onto the ice during his part of player intros. If you believe in omens, that ain't a good one, kids.

The Rangers won their home opener 6-4. Andersson was not hurt in the making of these GIFS. Well, physically at least.