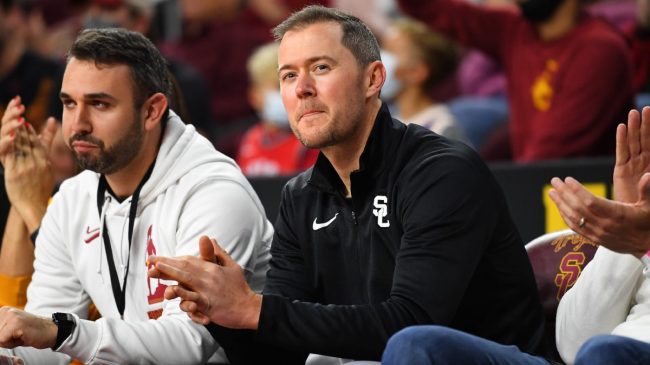 The USC Trojans are headed to the Big Ten.

Reports leaked on Thursday afternoon that the program, along with UCLA, would be on their way out of the PAC 12 and headed into unchartered territory.

Those rumors were confirmed shortly thereafter.

It’s a move that makes sense in some ways, which are mostly financial. But it also brings about a great deal of obstacles.

The transition, which won’t happen until the 2024 season, will also bring about some stiff competition. The Trojans and Bruins will now have to go through teams like Ohio State and Michigan to get to the College Football Playoff.

Prior, the only true national championship contender was Oregon.

Many questioned whether that upgrade in competition would lead head coach Lincoln Riley to having second thoughts about accepting the USC job.

It was rumored that he left Oklahoma and spurned LSU because he didn’t want to coach in the SEC.

Now, it appears we have our answer.

Lincoln Riley responds to USC’s move to the Big Ten

The head coach took to Twitter to talk about his program’s move. Lincoln Riley seems excited about the opportunity to compete in the Big Ten.

Excited to be a part of this historic move-

“Excited to be a part of this historic move. Can’t wait. Fight On!”

Riley led the Oklahoma Sooners to 55 wins over his five seasons in Norman. He’s hoping to duplicate that success at USC. The Trojans are looking to get back to relevance, and this move to the Big Ten is certainly a start.

Riley will have a bit more time in the PAC 12, but things will soon change quickly.