The Lions Booted Their Special Teams Coach For Having A Little Fun And Calling A Secret Fake Punt Vs. Titans 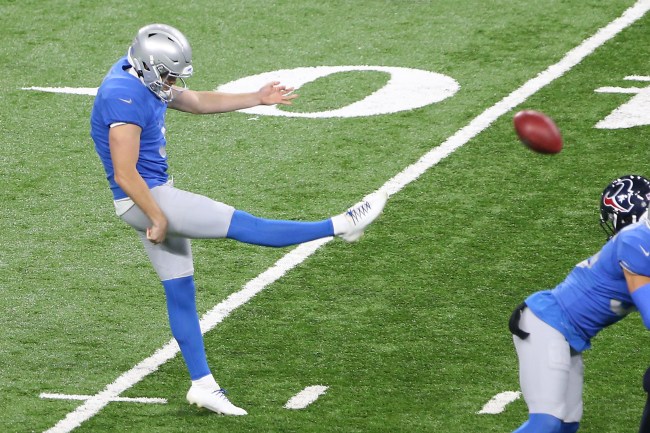 The Detroit Lions are constantly like that scene in the movie Happy Gilmore where, at the beginning of the flick, Happy’s girlfriend walks out on him and says, “You’re going nowhere, Happy, and you’re takin’ me with you.” Yeah, that’s the life of the putrid NFL team residing in Detroit, as the franchise hasn’t won a playoff game since 1957, and has gone a disgusting 32-45 in the past five years combined — and that includes back-to-back nine-win seasons.

After firing (now former) head coach Matt Patricia earlier this NFL season after continued struggles and allegations from former players of Patricia, well, sucking as a head coach, the Lions assumed they could silently wrap up 2020 without a bunch of other hiccups. Oh, but this is the Lions we’re talking about, so you know that just couldn’t happen.

So when the team fired (now former) special teams coordinator Brayden Coombs on Monday, one probably thought it was just part of the soon-to-come turnover heading into the offseason. A new regime is bound to occur, so Coombs may have just been the first casualty, right?

The Lions ended up firing Coombs for one pretty obvious reason: A secret fake punt that he called against the Titans. It failed, but, c’mon, Detroit is lifeless at the moment, so why punish the guy for taking a chance and trying something fun and unexpected?

The unit did come up short Sunday in the loss to Tennessee on a fake punt on fourth-and-4 at the Detroit 31. C.J. Moore took the direct snap and was stopped a yard shy of the marker by the Titans.

The decision appears to have been made by Coombs without consulting Bevell.

“If we’re going to say, ‘Hey, we’re doing this,’ then I feel like it’s important that I come through with that,” Bevell said. “And sometimes when it goes the other way, there’s moments that you can really help yourself or hurt yourself, and I thought this was really an important moment.”

This is so Lions it’s not even funny.

Of course, sources close to the team toed the company line when talking to USA Today about the firing of the 34-year-old Coombs, simply saying he wasn’t a cultural fit and was often late to meetings. He was also allegedly a self-promoter. And when interim head coach Darell Bevell was asked about the decision, he simply said the team would move on.

“I don’t want to use those words from me. We’ll just move on from there,” Bevell said when asked about any other issues.

The Lions are a complete mess with no plan to get out of their own way. And with a new head coach soon coming, fans can fully expect more losses piling up and (yet another) rebuild. Ah, good times in Detroit.