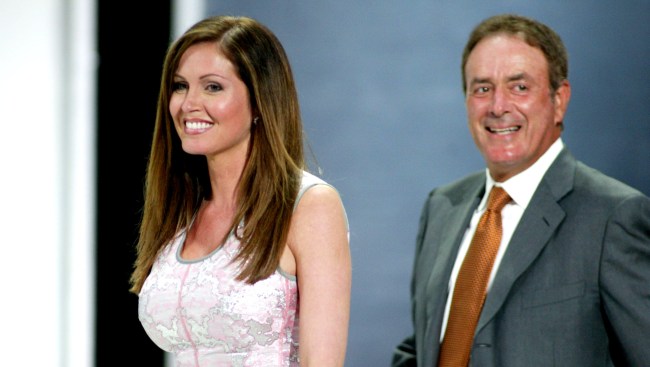 Wow. Did you know Monday Night Football has been on the air for 50 years? That’s quite a testament to its popularity.

Not that the show didn’t have dark times. Who can ever forget the Dennis Miller years? Or the one year that Frank Gifford, Joe Namath and O.J. Simpson manned the booth?

Not everyone can be Howard Cosell.

Monday Night Football has also had its fair share of sideline reporters over the years, some good, some bad.

Guerrero, a former cheerleader for the Los Angeles Rams, became a sports anchor in Los Angeles before getting hired by Fox and famously co-hosting The Best Damn Sports Show Period.

In 2003, she was hired by ABC to work the sidelines for Monday Night Football. She only lasted one season before being fired.

Smart move? Hard to say since around this same time the TV wizards at ABC thought this was also a good idea.

This week, Guerrero spoke to the New York Post about that time period in her life – the first time she’s ever discussed her side of what happened.

After one season as a “Monday Night Football” sideline reporter, she was fired. She was humiliated and clinically depressed.

Since her mother died of lymphoma when Guerrero was 8, sports had been her bond with her father. In 2004, after she lost her job, she tried to avoid sports entirely as she was in a fog, often unable to rise from bed in the morning, feeling bullied by criticism and taunts after being one-and-done on “MNF.”

One day, months after her firing, she drove on the Pacific Coast Highway. Out of old habit, she mistakenly flipped on sports radio.

The hosts cackled, reading a Pittsburgh Post-Gazette column that ransacked her name, focusing on her looks and calling her “MNF”’s “biggest liability ever.” She pulled over.

Many forget that when Guerrero was hired by ABC, Keith Olbermann, an ESPN superstar at the time, reportedly suggested that the show’s broadcasters Al Michaels and John Madden should resign in protest.

“I was terrified,” Guerrero said of her experience working on MNF. “People at home probably looked at it as, ‘She’s scared of the job. She’s intimidated by Monday Night Football.’ I wasn’t afraid of the job. I was afraid of [executive producer Fred Gaudelli]. I was afraid of him screaming at me after every game and during the game. I cried every game. It was awful.”

Gaudelli doesn’t remember it that way.

“I’ve always held the production and engineering crew, the announcers and, most of all, myself to the highest of standards on all shows,” Gaudelli, the current executive producer of Sunday Night Football, said in a statement to the Post. “I believe this approach has maximized the performance of those I’ve worked with for 34 years. I like Lisa. I did my best to support and encourage her. I’m disappointed to be hearing about this for the first time 17 years after we worked together on Monday Night Football.”

After realizing that she could still go on and do something unrelated to sports, and posing topless for Playboy in 2006, Guerrero was asked to join Inside Edition and was finally able to put the rough Monday Night Football experience behind her.

Today she is still with Inside Edition, having moved up to Chief Investigative Correspondent, and is very happy with where she is in life.

“I wake up and pinch myself every day,” said Guerrero. “I can’t believe I get to chase bad guys every day for a living. I get to make a difference in people’s lives and I get to make change happen. I get to be a victim’s advocate.”

Read the entire piece, written by Andrew Marchand, over at the New York Post.