Little Leaguer Hits An Absolute Nuke, Bat Flips To The Moon, Then Hits The Griddy As He Crosses Home 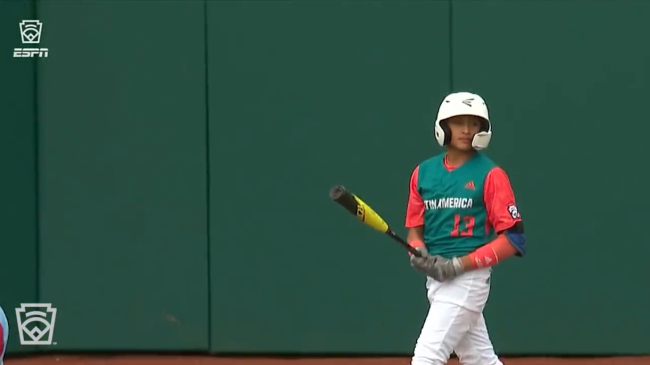 The Little League World Series, as it does every year, has produced numerous must-see moments this summer.

From monster home runs to unique, yet badass, choices of protective gear, the Little League World Series has been a blast to watch.

On Tuesday, during the fourth inning of a tie game between Nicaragua and Panama, Nicaragua’s Luis Garcia came to the plate.

With a 1-1 count on him and two runners on base, Garcia hit an absolute bomb off the Panamanian pitcher who had just entered the game.

It was such a no doubt shot that Garcia didn’t even run to first base, but instead took a few moments to admire just how far he had the the baseball.

Then, with both hands on his bat, the youngster launched a bat flip that would make Bryce Harper proud.

As he rounded third base and closed in on home plate where his teammates awaited him, Garcia proceeded to hit a nasty Griddy.

Fans, at least those who don’t think of themselves as baseball purists, absolutely loved it all.

This is what baseball needs more of 🤷🏽‍♂️ https://t.co/Ndo9HCtwxu

inject it into my veins https://t.co/3hpi5LVTzF