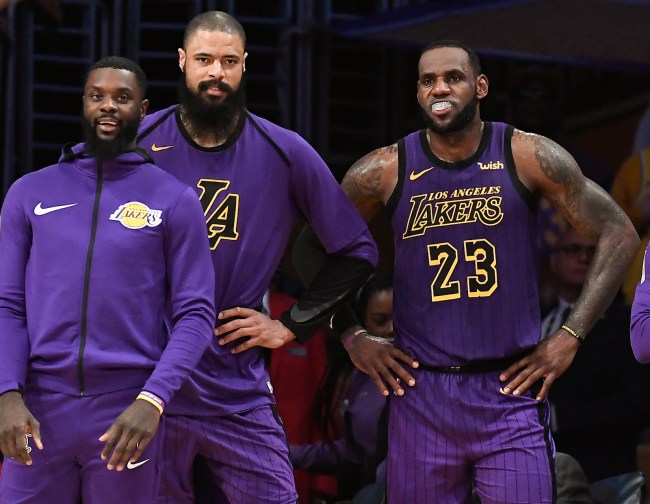 The Los Angeles Lakers have been the most dysfunctional NBA franchise this season. Yep, that includes all that losing and F’ed up stuff that’s happened with teams like the New York Knicks, because the Lakers actually had expectations this year, and totally fell flat on their face by missing the NBA playoffs for the sixth-straight season. Not even adding a future Hall of Famer in LeBron James could turn things around, so what’s next?

Considering there have been numerous reports out there that James is actually hurting the Los Angeles Lakers’ chances of hiring a head coach and new front-office leader, even after the team’s season ended, they’re still the talk of the league because of how messed up everything is. And it doesn’t seem as if the drama’s going away anytime soon.

That’s because, according to SB Nation, several reporters are claiming that the two head coaching candidates that the Lakers are highly considering for the vacancy, Monty Williams and Tyronn Lue, are being advised not to take the gig if they get an offer. Why? Simply put, because the whole situation is a mess. Just look at what ESPNs Ramona Shelburne had to say to ESPN 710 with Mason & Ireland about what she’s heard.

“I think Monty’s the favorite, but I don’t know how that interview went last night. I haven’t heard from either side and it also is a choice for him. He’s probably in line if Philly opens up. If they lose or if they fall short, he’d be in line to step in there. His kids are settled there, he’s done a lot of moving around, so I could see him stay there. And also, everyone in the league has told him not to take the job.”

Well, that’s certainly an interesting report. But it didn’t stop there, because, per Jorge Sedano of ESPN, he’s heard something similar regarding Tyronn Lue, with Lue’s people advising him against the Lakers job.

“So I told you earlier, and I mentioned this yesterday, that someone I know that is a mutual friend with Ty Lue, that is a very close friend to Ty Lue, told me, ‘I told Ty, don’t take the Lakers job. This thing is a mess.’”

The Los Angeles Lakers have LeBron James, have enough cap space for two max contracts this summer to, potentially, sign a superstar to play next to James, a young core and an iconic brand, yet, for some reason, they’re reportedly considered a worse destination for a head coach than a place like Cleveland or Memphis is pathetic. That said, nobody’s feeling sorry for the franchise considering they brought a lot of this on themselves.

With the perception of general manager Rob Pelinka reportedly not too great from some people around the league, Magic Johnson recently quitting his job as President of Basketball Operations — without telling his boss, owner Jeanie Buss, beforehand — and no end in sight for the drama that’s happening, the Los Angeles Lakers could be in for a long summer. Unfortunately, it also happens to be the most important one in recent memory for the franchise, so, yeah, not great timing to have all this stuff going on.