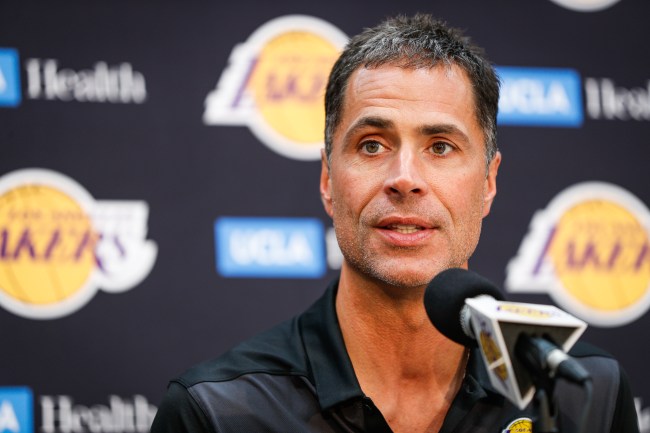 Los Angeles Lakers fans sure didn’t think this season would be as dramatic and dysfunctional as it’s turned out to be, huh? After signing LeBron James over the summer, may had visions of deep playoff runs in their minds, but, thanks to injuries, inconsistency, trade rumors that impacted the team’s psyche and other things, the 2018-19 Los Angeles Lakers will be remembered more for their losses than more for their wins.

And just when the season’s about to end and Lakers fans didn’t think it could possibly get any worse, Stephen A. Smith goes on ESPN’s First Take yesterday and delivers the news that the Los Angeles Lakers’ general manager, Rob Pelinka, is “despised” by people in the NBA. No, seriously, Stephen A. emphatically said that, adding that Pelinka was one of the main reasons why other teams weren’t taking his phone calls around the trade deadline, which ended in the Lakers missing out on a potential Anthony Davis deal.

Here’s what Stephen A. Smith had to say about what he’s heard from people around the league about Los Angeles Lakers:

“Rob Pelinka, there are people in the league who despise him. To the point where I can’t even throw aside the word hate. They don’t talk about him glowingly, they have a real problem with him. They don’t like him. In some instances, they’ve been highly reluctant to take his phone calls which is why Magic had to be involved in terms of being on the phone particularly when it came to the issue involving Anthony Davis and the Pelicans.” Smith said.

Those are some pretty harsh claims to make, but, if there’s truth to them, it makes sense as to why the Lakers weren’t able to make a big-time trade a couple of months ago to add to their roster for a playoff push. Given Rob Pelinka’s background prior to taking over the GM role with the Los Angeles Lakers, it does seem like Stephen A. Smith could be onto something here.

For those unfamiliar, Rob Pelinka is a former sports agent who wasn’t only the CEO of his own sports agency, but represented players like Kobe Bryant, James Harden and Buddy Hield. This was all as recently as 2016, meaning the Lakers GM is a couple of years removed from being on the other side of the table in negotiations with NBA teams. That may be why Stephen A.’s comments could have some truth behind them.

With the offseason coming up and the Los Angeles Lakers having two max slots available to add superstars alongside LeBron James, it’s a huge summer for the future of the franchise. However, just yesterday, ESPN’s Brian Windhorst claimed that the Lakers may be a “backup plan for second-tier players,” meaning there’s not much optimism that the team can land a top free-agent like Kevin Durant, Kawhi Leonard, Kyrie Irving or Klay Thompson, among others. Man, how the mighty have fallen.

If we’re being honest, though, whether Smith’s report is true or not, Rob Pelinka didn’t snag LeBron James last summer, Magic Johnson and the aura of the Los Angeles Lakers did — along with the whole Hollywood agenda James has for himself. So, while the guy may be qualified to be in his current role, it doesn’t sound as if other NBA teams are willing to work with him, and that’s a major warning sign as the Lakers enter this offseason looking to get much better.