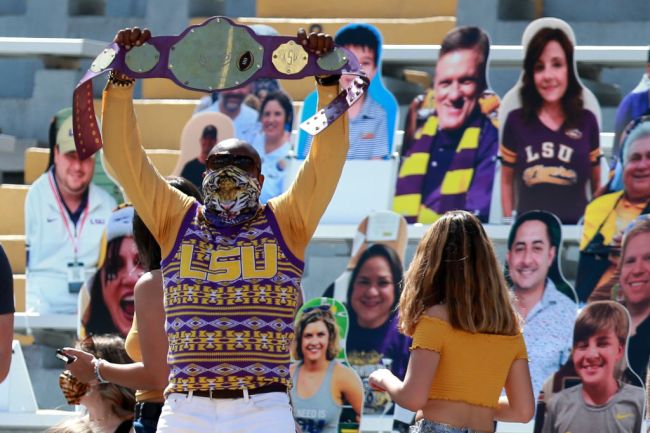 We’re technically four weeks into a college football season that has already hit plenty of road bumps that have taken a toll on a suspension that hasn’t given out just yet. Some of the biggest conferences are still a month away from actually starting their year and the vast majority of programs haven’t played the number of games they traditionally would’ve by now thanks to how many have been postponed and rescheduled as schools do what they can to play through the adversity they currently face.

LSU was already facing an uphill battle heading into things thanks to the number of starters who departed after the Tigers secured a national championship and experienced some major setbacks as they geared up to get back into action thanks to an outbreak that Ed Orgeron claimed resulted in the majority of his players becoming infected over the course of the summer.

One of the biggest adjustments every school has had to make is the lack of fans, and while some have banned spectators from attending games entirely and tried to make up for lost revenue by packing the stands with cardboard cutouts, LSU has taken a hybrid approach by supplementing fake supporters with a crowd that’s 75% smaller than the one you can usually expect to see in Death Valley on Saturdays.

As a result, the vibe was noticeably different when the Tigers faced off against Mississippi State over the weekend and the Bulldogs took great joy in pulling off the upset on their opponent’s turf after coming away with a 44- 34 victory. There are a variety of factors you could point to in order to explain the loss, but after the game, Louisiana’s Attorney General Jeff Landry opted to place the blame on Governor John Bel Edwards for limiting the stadium’s capacity (and, in turn, reducing the team’s home-field advantage).

Hey @LouisianaGov this is what happens when you don’t fill LSU stadium!

Edwards issued what turned out to be a Freezing Cold Take prior to kickoff but declined to get into a Twitter war with his AG after his prediction blew up in his face.

Today, as our LSU Tigers beat the Bulldogs on the field, do your part to beat them at the census. Mississippi has a higher percentage of people who have filled out their census than us. Tigers don't lose on the field, so let’s not lose on the census either. #lagov #GeauxTigers

Dropping the first game of the season is certainly a bold strategy when it comes to trying to repeat, as the Tigers dropped to 20th in the AP rankings after coming into the week as the sixth-best team in the country. With that said, anyone claiming to know how things are going to play out during this bizarre season should have their opinions soundly ignored so I guess we’ll have to wait and see.