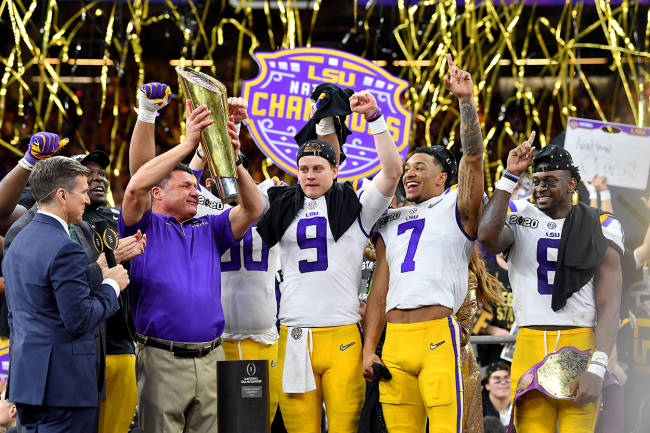 Although it is undoubtedly up for debate, it is hard to make a case that 2019 LSU football is not the greatest team of all-time. The Tigers went 15-0, won a national championship, had the Heisman Trophy winner and dominated nearly every other individual position award.

And now, three years later, that team is set to make its mark on the next level.

The amount of players that have been drafted into the NFL over the last three years puts LSU football’s dominance in 2019 into perspective.

With the No. 124 overall pick in the 4th round of the 2022 NFL Draft, the Cleveland Browns selected LSU kicker Cade York. It marked the first time in school history that a kicker had been drafted.

In addition, it marked the 20th starter from the 2019 national championship team that had been drafted. That’s insane.

As things currently stand, the only two players from LSU’s roster that season who have not been drafted are Adrian Magee and Glen Logan. Both guys have since signed as undrafted free agents, putting the Tigers’ entire 2019 starting lineup — on both sides of the ball — in the NFL.

19 of the 22 players who started in #LSU’s National Championship game win in 2019 have now been drafted.

Toss in kicker Cade York, the lone kicker drafted in school history, and the number goes to 20 starters.

To make things even more impressive, York was the 29th player from that team to hear his name called, even beyond the starters.

That doesn't even include four UDFAs that had solidified roster spots entering the draft.

Although the exact number is unclear, that number either breaks, or is super close to a record. Florida State’s 2013 team is right there with 2019 LSU.

Some SID has to know

Here’s a good look at FSU:

This is what we do. #FSU pic.twitter.com/tcGwpZTfxe

Again, there is an argument to be made that the one of the 2013 Seminoles, 2004 USC Trojans or 2005 Texas Longhorns is the greatest college football team of all-time. Based on the amount of points scored, and recent NFL Draft success, it’s hard to say that 2019 LSU is not the best to ever do it.