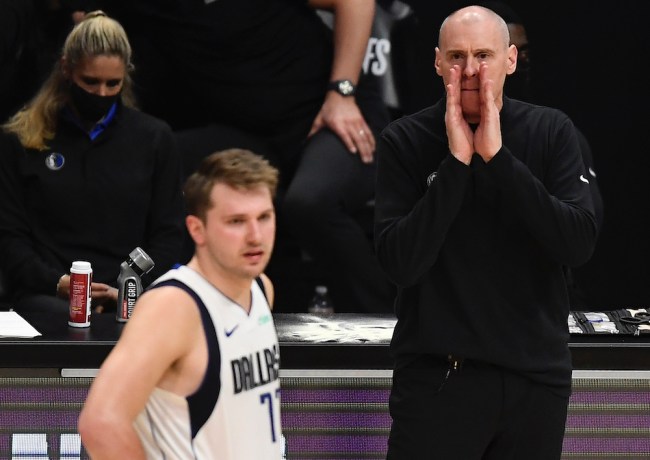 There’s no denying the fact that Luka Doncic is the face of the NBA, with the Dallas Mavericks point guard already breaking all sorts of records despite only being in the league for a mere three seasons. With that superstardom comes scrutiny, however — and the two-time All-Star’s starting to see his fair share since being bounced from the NBA Playoffs.

Doncic, whose team blew a 2-0 series lead against the Clippers earlier this postseason, has now getting blamed by some for the moves the Mavericks have endured since being eliminated. Among the changes, the team saw longtime GM Donnie Nelson Jr. resign on Wednesday, and then had now former head coach Rick Carlisle do the same on Thursday.

So why the sudden changes? According to ESPN’s Tim MacMahon, some of it has to do with Luka Doncic, with the writer saying on Friday that the star’s belittling of Carlisle in front of teammates led to “simmering tension.”

There had been simmering tension between Luka Doncic and Rick Carlisle that was a concern within the Mavs organization. The expectation was that he'd return next season, but he'd have been on the hot seat. https://t.co/YRJ1fwQ6GQ

But MacMahon’s report didn’t stop there. Appearing on The Lowe Post podcast, the ESPN hoops reporter described a situation during the season during a timeout when Doncic purposely pushed Carlisle’s buttons.

“(Brian) Windhorst passed this on to me earlier in the season and I was able to confirm it … It was a timeout. Luka, as tends to happen, was pissed,” MacMahon said. “And he yells at Rick, ‘Who’s in charge, you or Bob?’ He yells it front of all the Mavericks players, in front of all the assistants, anybody down on the floor could hear it. The Luka-Rick relationship was dicey.”

Apparently, Luka Doncic had grown frustrated with the influence of a former professional gambler hired by Mavericks owner Mark Cuban named Bob Voulgaris — who was brought into the franchise in 2018 to be the director of quantitative research and development. The outburst described above by MacMahon occurred during a game this season when the team had zero fans in the stands, meaning everyone could hear it.

As is the case after a team loses in the NBA Playoffs with a young superstar like Doncic, changes typically occur. The league is star-driven, so situations like this tend to leak out after an early exit when tensions are the highest. This appears to be the latest turnover with the Mavericks organization, representing a changing of the guard from the championship season a decade ago.

With Luka expected to sign a massive five-year,$200 million extension this offseason, it’s clear Cuban is putting the franchise in the hands of the 22-year-old. We’ll have to wait and see how this all shakes out and if the point guard has input on some of the changes soon to come.