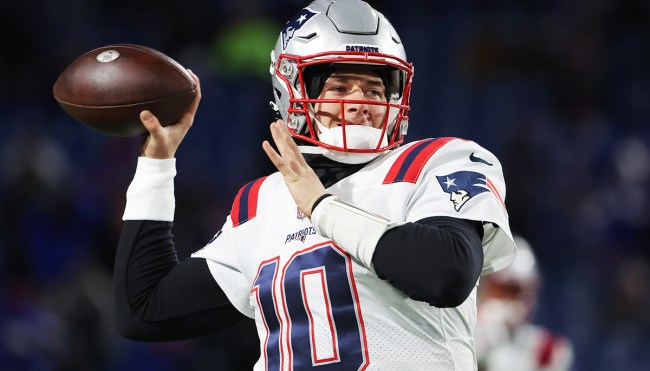 If you’ve ever turned into an NFL telecast, then you’re likely aware that the commentators in the booth traditionally meet with coaches and players from each team to gain some insight into their gameplan prior to every showdown.

However, as Peyton Manning revealed on the now-beloved “Manningcast” that has been airing in conjunction with most Monday Night Football games this season, he was denied the opportunity to get to discuss how Mac Jones was planning to approach New England’s recent showdown with the Bills after the rookie quarterback asked him to clear the request with the team’s public relations director—who ultimately turned the legendary QB down.

It's all about football in Mac Jones' rookie season 🏈 pic.twitter.com/tab8el9nnk

Manning said it was the first time he’d been negged by a team but made it clear he understood the situation, saying the Colts took a similar approach during his first year in Indianapolis in order to minimize off-the-field distractions.

Jones was permitted to chat with the media when he called into WEEI on Tuesday following a contest where he was essentially a non-factor thanks to vicious weather conditions that led to the Patriots attempting a whopping total of three passes over the course of the game.

During the discussion, Jones echoed what Manning hinted at during the simulcast when he addressed the situation, saying:

When you consider New England has not only bounced back from a slow start to the season but are currently the favorites to take home the Lombardi Trophy when it wraps up, it sure seems like they’re doing something right.