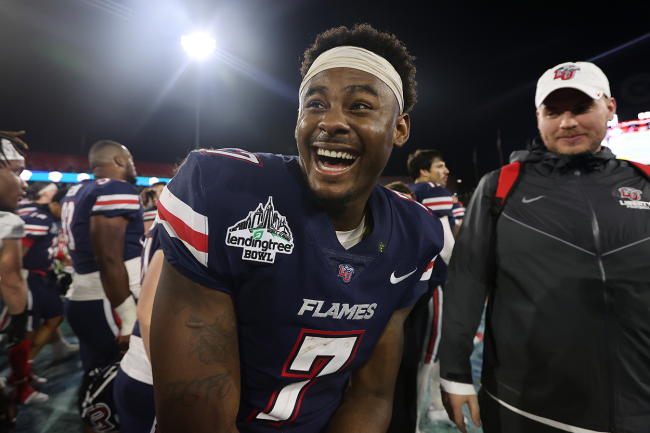 Malik Willis put on an absolute show during his Pro Day on Tuesday. The former Liberty quarterback, who transferred after two years at Auburn, has been rising up NFL Draft boards and could very easily be the first quarterback taken in the NFL Draft come April.

Willis stands 6-foot-1, 215 pounds and has a cannon for an arm. He can also make defenders pay a steep price for challenging him with his feet.

"The ball jumps out of his hand."@movethesticks shows you why there's a lot to be excited about watching @malikwillis 🎥

Willis chose not to run the 40-yard dash at the NFL Combine because he wants to be very clear that he is a quarterback. He also chose not to do so again at his Pro Day.

That was totally fine with the scouts in attendance because Malik Willis’ 70-play throwing script at his Pro Day was flawless.

Willis began the day with some shorter routes to show off his accuracy. In the process, the NFL Network broadcast took note of his massive lower body. He does not skip leg day.

“Calf, quads, he is solid. He is 225 pounds, and I think 220 of it is in his legs.”
@RhettNFL, @MoveTheSticks and @BuckyBrooks break down how build helps generate torque.

From there, Willis opened things up a little bit and showed off his deep ball ability. He could drop a dime into a bucket from 40 yards away with ease.

And, when it comes to football, attitude is a big thing. NFL organizations look for talent, but they also look for guys who just love the game. Willis loves the game.

When it came to his best throw of the day, Willis put a 70-yard ball on an absolute rope. To celebrate, he walked it off by getting the crowd fired up.

Unbelievable throw. Great celebration. @malikwillis is doing it all.

The final throw of the day was not only his best, but it was incredibly hype.

Wherever Willis ends up, his rising stock sets him up to be a solidified starter in the NFL if not this year, than in the near future.