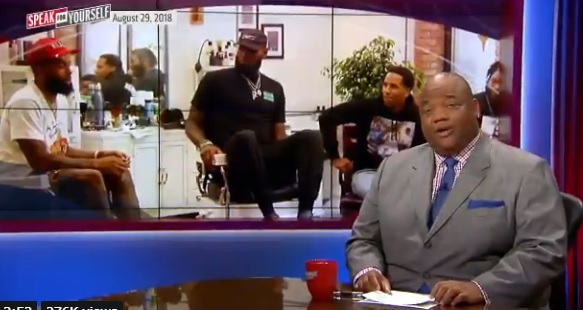 Over the weekend, LeBron James premiered his new show “The Shop” to rave reviews.

This should not be a surprise because it’s LeBron and everything he does is great. But “The Shop” was awesome. Such a smart idea and fantastic execution by @KingJames and his team. So real. So important. Such compelling conversation.

I really glad The Shop showed how these guys really talk when we the media aren't around. Good stuff.

While many enjoyed the unfiltered conversation among athletes, Fox Sports host Jason Whitlock felt like the language was off-putting for someone of LeBron’s stature and even went on to call LeBron “ghetto” and “ratchet”.

The profane primitive and priviliged inside his fantasy shop which was best described as the black billionaires barbershop. LeBron’s shop was what Donald Trump must imagine a black barbershop is like everyone is cursing and dropping the N-Word and there’s a token white liberal soaking it in and feeling the coolest person in the room because black people are confortable being ignorant in front of him. Twitter absolutely loved LeBron being this ratchet and ghetto.

Of course fans on Twitter were annoyed with Whitlock’s take.

Biggest stretch in that video is Jason Whitlock claiming he gets hair cuts at black barbershops.

Lavar Ball told us the only thing Jason Whitlock can comment on, why y’all still listening? pic.twitter.com/MUwWpKDooL

Marcellus Wiley, who set to co-host FS1’s Speak For Yourself with Whitlock in September, issued a stern warning towards his colleague.

.@WhitlockJason should know actions speak louder than words. Enjoy these uncontested shock jock rants before I start because these won’t fly far on my watch. #oha https://t.co/YZRrHBRxsd

I disagree with that sentiment. ‘Friends close, enemies closer.’ 😉 I’d rather engage with those who differ than be stuck in the echo chamber. Those battle dynamics excite me! 🙌🏿#sfy https://t.co/dCvPxCgJ6R