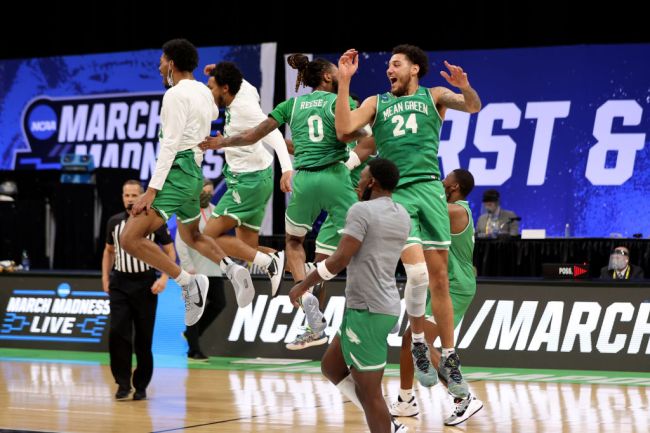 I am conducting the bandwagon for North Texas— hop on now before it leaves the station. 4-seed Purdue was on the wrong end of a crazy overtime upset to continue an epic first day of March Madness and 13-seed North Texas took down the Boilermakers in overtime. It staved off a second-half comeback and played a very complete game against a team with a lot of talent, but the highlight was Javion Hamlet’s father Louis.

This year’s March Madness was bound to be one of the most wide open fields in recent history and it has not lived short of expectations. We’ve already seen 15-seed Oral Roberts take down Ohio State in overtime, BYU play the role of hero (literally), Oregon State roll as the nation’s hottest team, and Arkansas get chippy about toothpaste after taking down Colgate. That trend continued with the Mean Green from Denton, Tex. playing a complete, hard-nosed game against Purdue and earning the program’s first-ever NCAA Tournament win in some sweet uniforms. Look at Louis with his iPad.

Hamlet dropped a double-double and was the game’s second-highest scorer. He was a two-star recruit out of high school.

Javion Hamlet was COOKING in the Mean Green’s upset 🍳

North Texas out shot its opponent 47.5% to 36.2% for a full 45 minutes. The Boilermakers went down as many as eight points, but came back with a hammer from Trevion Williams, who recorded his 11th double-double of the year.

TREVION WILLIAMS ON YA HEAD!!! 🔨pic.twitter.com/sOFHzBWscu

Jaden Ivy scored a game-high 26 and also made ridiculous plays to keep his team in the game.

North Texas punched its ticket to the Second Round with a 78-69 after going on a 7-0 run to begin overtime. It was not a nice night for the only team playing in its home state. Purdue’s Mackay Arena is located 69.3 miles from Lucas Oil Stadium, the host gym for the game, and none of Indiana’s other schools qualified. Indiana, Indiana, Butler, Notre Dame and Valparaiso were amongst the common names to be in the mix. You can now put the Boilermakers in that mix.

North Texas came out in OT with its foot on the GAS.

The Mean Green keep dancing at the fate of the bubble state, which slates them to play either Villanova or Winthrop. I hope that Louis wears the same sweatshirt and sits in the same seat for good luck. His son is my favorite storyline of the season and I am all-in. I’ll have to get myself a pair of goggles like in the movie.