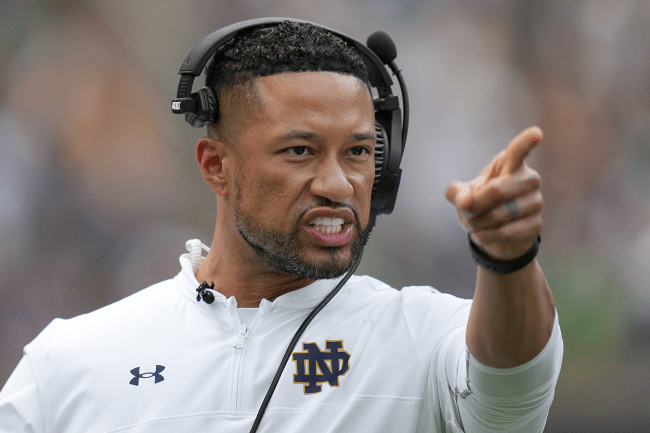 Over the past six months, there has been a lot of change at Notre Dame University. Particularly within the football program.

After reaching a New Year’s Six bowl game with an 11-1 record during the regular season, Brian Kelly packed up his things and essentially left overnight for LSU. In his place, 36-year-old defensive coordinator took over.

The reaction when the players found out was pure joy.

After Kelly bounced for Baton Rouge, he tried his best to bring his staff pool with him. Very few of them made the switch and the vast majority of Notre Dame assistant coaches are still in South Bend under Freeman. That in itself spoke wonders about Freeman— (and Kelly).

Since then, the amazing stories out of Indiana about the culture change under Freeman’s guidance have been overwhelmingly positive. The players, the coaches, the staffers, the student body and the alumni and fanbase are thrilled with who is at the helm.

That is also the case with recruits and commits. At the end of April, four-star wide receiver Braylon James committed to play for Notre Dame out of Texas.

In the process of his commitment, he ruthlessly trolled Kelly and LSU before ultimately donning the Fighting Irish hat. James made another profound statement on Wednesday night.

During a live conversation on Twitter, the Top-100 recruit spoke about why he chose Notre Dame. James said that he would not have done so if it weren’t for the man leading the program.

James’ comment speaks loudly about Freeman and Kelly. LSU did offer him prior to Kelly’s hire and the Tigers made his top-nine. However, in the end, he chose to play in South Bend for Freeman.