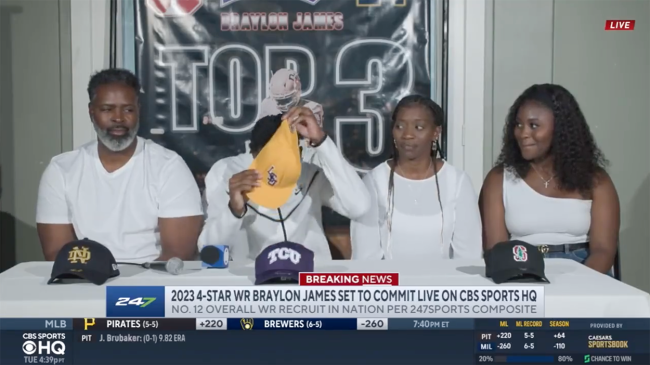 The beef between LSU and Notre Dame football is very real. Ever since Brian Kelly abruptly left South Bend for Baton Rouge, there has been a lot of tension between the two programs.

First and foremost, the Fighting Irish staff made it very clear how they felt about Kelly when the vast majority chose to stay at Notre Dame and coach under Marcus Freeman instead of leaving for LSU. In addition, a recent story about Freeman illuminates the glaring difference from the Kelly era in Indiana.

On the other side of things, Kelly recently posted and deleted an Instagram post that may or may not have exposed pending turmoil at Notre Dame while in Louisiana. Meanwhile, an unemployed Ed Orgeron — whom Kelly replaced at LSU — visited South Bend and took indirect shots at his successor while praising Freeman.

All of this goes to say that the petty wars are alive and well. It has even played out on the recruiting trail.

While announcing his decision, there were three hats on the table in front of him — Stanford, TCU and Notre Dame.

As he made his decision live on CBS Sports HQ, James proceeded to troll LSU by pulling a Tigers hat out from under the table and putting it on his head momentarily before throwing it aside and putting on the Notre Dame lid. He committed to Freeman after presumably getting Kelly and his staff’s heart racing with his pump fake.

Take a look at the faces of his family while he pulls out the LSU hat, they can hardly hold back their laughter:

Whether he was intentionally dissing Kelly and the Tigers or just having some fun at their expense, James was ruthless. The beef between LSU and Notre Dame is very real and it’s time that we get a home-and-home between the two schools on the calendar.