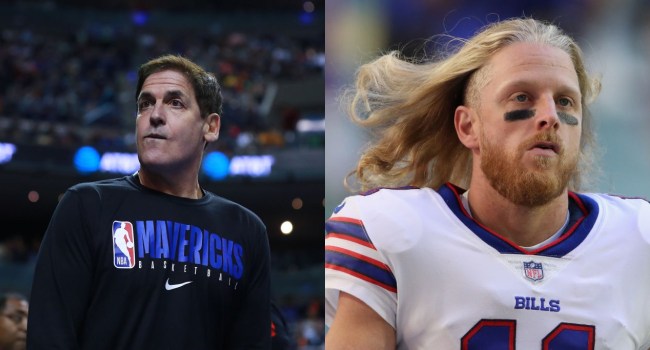 Let me just say: what an absurd headline, am I right? Took me a couple of tries to crack that one as there’s a lot of information to unpack here.

For those who aren’t aware, 32-year-old Buffalo Bills wide receiver and perennial fantasy football steal Cole Beasley is quite outspoken about his decision to not get vaccinated, as his Twitter profile consists almost entirely of vaccine-related discussion. And you know what, all the power to him: it’s his Twitter profile and his right to free speech. Have at it, Cole. First amendment your heart out. In fact, I couldn’t agree more with his following sentiment:

If y’all are tired of hearing about it get off Twitter.

But the problem with the first amendment is — and the reason lawyers in movies and TV shows are always telling their clients to keep their mouths shut until they arrive — is that it opens the door for you to talk yourself into a corner. Ye ole “You have the right to remain silent, anything you say can and will be used against you in a court of law” — there’s a reason Miranda Rights exist. And it appears Beasley has done exactly that with his Tuesday morning tweets.

Responding to an article from Pro Football Talk that suggested the NFL should present its players with an ultimatum — “Get vaxxed and don’t get tested for marijuana” — Beasley said not only would he get the vaccine, but that he’d actively “advocate” for Pfizer if ” a percentage of its earnings from the vaccine in my wife’s name.”

I’ll get vaccinated and be an advocate for it if Pfizer puts a percentage of its earnings from the vaccine in my wife’s name. https://t.co/2tOr9jjDaM

I’ll tell you what Cole. You get vaccinated and promote vaccination on all your social, I’ll buy your wife a share of Pfizer stock. It pays a 3.78% dividend. That way she is getting a percentage of Pfizer’s earnings. Deal ? https://t.co/gMmMHt97ro

At the time of this writing — just before Noon on Tuesday — Beasley has yet to respond to Cuban.