Mark Davis Is A Middle Schooler In A 66-Year-Old’s Body, This Video Confirms It 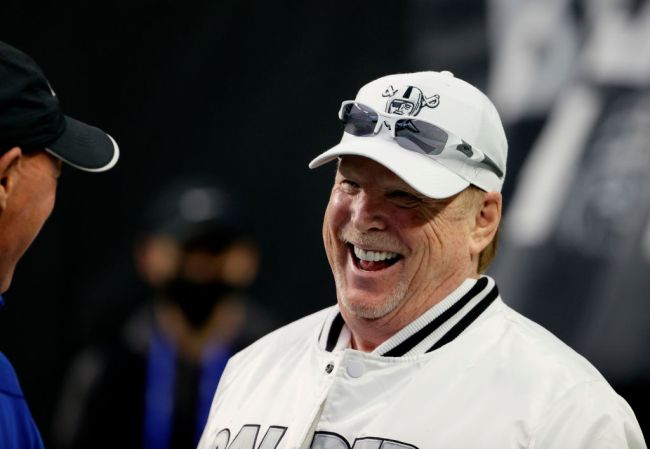 Mark Davis has been making headlines with his fashion sense and hairstyle for years on end now. But no matter how many times we see the man in an old-school Raiders jacket or get a glimpse of that beautiful set of hair, we’re still blown away by what we’re witnessing.

Take this exact story right here as an example.

After having to let go – or accept the resignation – of Jon Gruden following his emails being leaked, Davis was asked if wants to see more details regarding the league’s investigation into the Washington Football Team. Davis explained to reporters that he’d like to see a written report about the investigation, despite NFL commissioner Roger Goodell saying the investigation has been closed.

That’s big-time NFL news right there, an owner asking to get a report about an investigation.

Davis was rocking his famous hairstyle, his white Raiders Starter jacket, and what appears to just be a plain white t-shirt underneath. Only this time around he threw a wrinkle into the equation, a black backpack.

Instead of taking off said backpack while sitting down in a straight-backed leather chair, he decided to keep it on just like some random 11-year-old kid would do.

With his latest move with the backpack, this now confirms that Davis is a middle schooler trapped in a 66-year-old’s body.

Mark Davis on if he would like to see a written report from the WFT investigation: “Probably. Yeah, I think that there should be…” pic.twitter.com/v0ksWzsXOx

That man above is worth a reported $700 million, just so you know. He looks more like a kid ready to catch the bus than one of the richest people in America, and that’s what makes Mark Davis just so great.