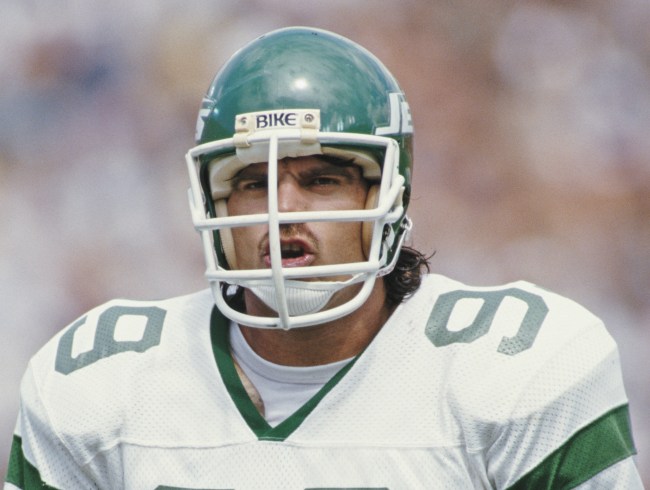 Mark Gastineau was an absolute beast during his time with the New York Jets, with the former defensive lineman racking up a total of 74 career sacks over his 10-year career. While that may not seem overly impressive at first glance, when you remember that sacks didn’t become an official NFL stat until 1982, it sure as hell proves how good Gastineau was.

Over a four-year stretch from 1982-85, Mark Gastineau averaged 15.1 sacks per season, which helped earn him a Pro Bowl trip in each of those seasons, while also establishing himself as one of the most feared defenders of opposing quarterbacks. And, while the Jets great isn’t in the Pro Football Hall of Fame, he had more than just a solid NFL career.

While many casual fans or people who didn’t see Gastineau play may not remember his talent, there was always one thing that he was known for — holding the league’s single-season sack record, which, at the time, was a whopping 22 in a season. Of course, that was broken 19 years ago by Michael Strahan in a game between the Giants and Packers, which saw Green Bay quarterback Brett Favre mysteriously take a dive to give the defender the record. Take a look below to refresh your memory.

Here's a video of a record being GIVEN not earned.. Even the announcers knew it. Mark Gastineau will always be the Sack King. 👑👑👑👑 #Jets #takeflight pic.twitter.com/Vt8WaoZT8J

As the video shows, Favre was obviously being pressured by Strahan on the play — and had little choice but to go down — but it’s long-been a debate about the legitimacy of that record-breaking sack given the quarterback took a fall rather than even attempt to get away. And, because of that, Mark Gastineau is fighting for his right to regain the title of the single-season sack record.

While recently talking to ESPN, the Jets great outlined his argument for why he, not Strahan, should be remembered as the best at taking quarterbacks down in a single season.

“It’s my record, and I want it to be known that it’s my record,” Gastineau told ESPN on Monday in a phone interview. “I’m not going to say, ‘I don’t want to hurt anybody’s feelings.’ It’s my record.”

“Being nice and being a good sport, that’s good, but it’s not real,” Gastineau said. “In fact, I’m kind of a liar in a way. I feel like there’s just something wrong.

The 63-year-old had been quiet about it all these years, even showing up and congratulating Strahan on the field in 2001. He has had enough.

“It’s a good record and it took me a long time to get that,” he said. “It took a lot of work, a lot of work to get that record. So many years I worked my butt off to get it, and I finally got it, and it shouldn’t have been cheapened like it was. It’s like a tarnished record.”

“I just want to be recognized for the record,” Gastineau said. “You wouldn’t want your son getting a record like that. I don’t think it’s good for the NFL. It was never good for the NFL, and I’m surprised the NFL didn’t step in.”

Man, the fact that Mark Gastineau is still trying to hold onto this single-season sack record is pretty sad. Not only did Strahan break the thing in 2001, but, get this, even if the league did step in and decide that Favre sack was a fluke, there have been two other players who have broken the record since — with Jared Allen racking up 22.0 sacks in 2011 and Chiefs linebacker Justin Houston matching the same total in 2014.

We’ve all heard of guys bragging about their glory days from high school, and, sadly, it seems like that’s the case with Gastineau here. Might be time to just move on and not dwell on this anymore, man.