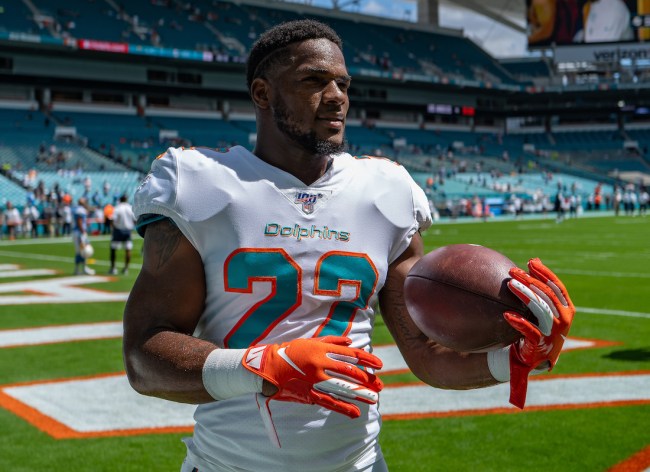 Many football fans probably don’t remember the name Mark Walton, but the former NFL running back played a few games in the league a couple years back. Drafted by the Cincinnati Bengals in the 4th round (No. 112 overall) in the 2018 NFL Draft, the former University of Miami star saw limited action before being released prior to the 2019 campaign. The reason? Walton was involved in a whopping three drug-related arrests from January to March.

Since the NFL loves second chances, Walton was picked up by the Miami Dolphins in 2019, and actually started four games for the team before being suspended for violating the league’s personal conduct and substance abuse policies for those prior arrests. Eventually, Miami dropped him and he hasn’t played in the NFL since.

Sadly, his off-the-field issues haven’t subsided, with Mark Walton once again getting arrested, this time outside of a Pizza Hut in Miami on Sunday — and the details are ridiculous.

According to Andy Slater of FOX Sports 640 in South Florida, cops were called after Walton tried breaking the windows of the pizza chain after he was “disrespected” on the phone while ordering his food. When the former NFL player’s cousin tried calming him down, Walton went nutso on him, beating the cousin up so badly that paramedics had to be called.

MORE: Walton also beat up his cousin outside the Pizza Hut, I'm told, when he tried to get the NFL free agent to leave the area.

Paramedics had to respond.

What a sad story for a guy who’s still only 23 years old. Prior to the incident at Pizza Hut, Mark Walton was reportedly hopeful for another chance at playing in the NFL. Unfortunately, chances are slim he’ll get the chance given the latest run in with the law.

Even if the running back does (somehow) get another crack at the NFL, he’ll be forced to sit for eight games due to accusations of punching a pregnant woman in 2019. While those charges were dropped last year, the league still determined he needed discipline.

Who knows what comes next for Mark Walton, but with such a short temper, it’s clear the dude needs some help before ever thinking about the NFL again. Hopefully he gets the support he needs, because, sheesh, the entire Pizza Hut situation is absurd.