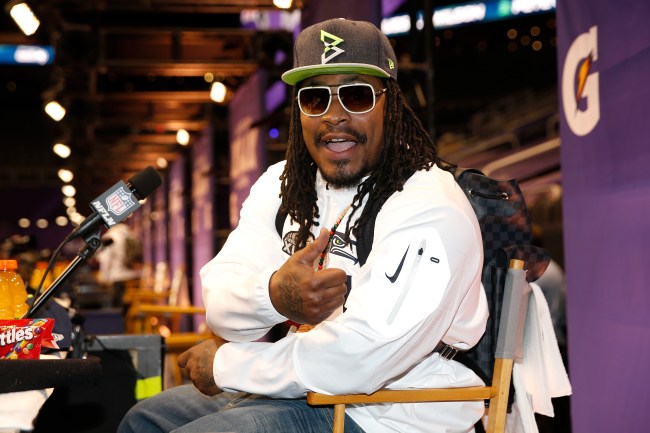 Marshawn Lynch is one of the most interesting pro athletes ever. Known for his “beast mode” style of running and exuberant personality on the field, when the cameras are in his face off the gridiron, Lynch typically goes into a shell and doesn’t really say much. It’s truly a Jekyll and Hyde sort of thing, which makes Lynch a little bit of an enigma.

However, as much as Lynch doesn’t like to bring too much attention to himself, he’s a huge member of the community. Not only is he a board member at the Fam 1st Family Foundation — which focuses on “intrinsic family values of loyalty and leadership to impact the lives of Oakland’s disenfranchised youth” — but he’s also previously hosted 25 kids for a trip to London to watch an NFL game, and has worked with the Make-A-Wish Foundation. It’s all part of the reason why, in 2018, Marshawn Lynch earned the Oakland Raiders’ Walter Payton Man of the Year Award nomination.

Now, given all of Lynch’s impact on his community and his success in the NFL, one would think he’d be a helluva person to hear speak to influence others, right? Well, some Princeton seniors don’t seem to think so, because, after hearing that the football player was selected as a speaker at the Ivy League school’s heralded “Class Day” — which celebrates the end of the students’ undergraduate careers — the entitled students rebelled, even writing an op-ed in the student newspaper rebelling against the choice. Take a look at what some of the kids had to say after hearing the news.

Per The Daily Princetonian:

As seniors, we had been looking forward to the speaker announcement for months,” the letter reads. “Many of us were disappointed when we saw that this year’s speaker was to be Marshawn Lynch, mainly because we did not feel included in the process by which this speaker was nominated and finally selected.

It goes without saying that Lynch has had an incredibly impressive career as an NFL football player and as a social activist. He has given back to his home community of Oakland through many philanthropic activities and has organized football clinics around the world. However, saying that Lynch has “unapologetically embodied and advocated for our own identities and values” (as stated in the University’s official Instagram post) without actually consulting us, the Princeton community, is paradoxical and thus questionable. We do not mean to criticize this choice of speaker in particular, but rather want to call attention to the opaque selection process for Class Day speakers.

On receiving the email about the speaker announcement, members of the senior class who were not aware of Lynch tried to learn more about his identity and relevance to our Class Day ceremony. Among articles that praised his NFL career and philanthropic contributions, we came across articles discussing Lynch’s reticence with the media and his terse responses at press conferences. In 2013 and 2014, for example, Lynch was fined $50,000 and $100,000 for refusing to speak to the media. During the 2015 Superbowl Media Day, Lynch famously responded to multiple questions with variants of “I’m just here so I won’t get fined.” With no other frame of reference, such reports caused confusion over the set of criteria that led to his nomination.

Talk about criticism, huh? Marshawn Lynch has had some previous issues with the media and such, but the fact that Princeton students are crying about the school selecting him as a speaker is laughable. To be blunt, it makes them seem entitled and closed-minded.

Sure, Lynch doesn’t have any ties to Princeton — he went to UC-Berkeley, a prestigious school in its own right — but every Princeton senior would benefit from hearing him talk about his journey from the streets of Oakland to a transcendent NFL star. There’s a lot of value there, so here’s to hoping the school doesn’t retract its invite to the running back after seeing negative feedback from a few students.