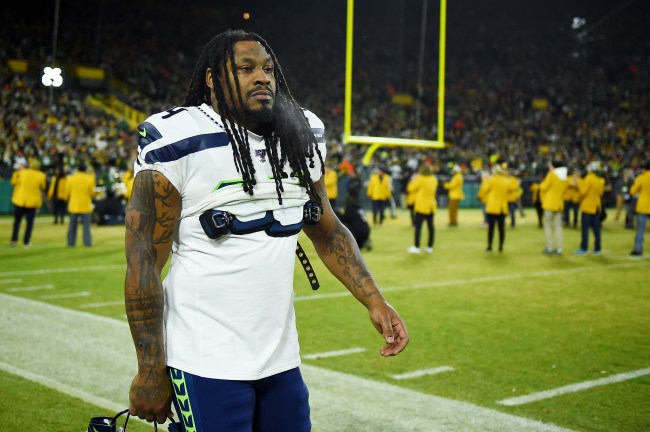 It’s no secret that Marshawn Lynch is, uh, eccentric. The five-time Pro Bowl running back has played by his rules and entertained folks in plenty of unique ways stretching back all the way to his college days at Cal. Anyone else remember that whole golf cart swerving on the field thing that “Beast Mode” did? Yeah, classic.

Things only escalated after Lynch entered the NFL, with the bulldozer of a runner sharing his obsession with Skittles — which led to fans throwing them on the field after he scored touchdowns — and, even more famously, was quoted as saying he was “only here so I don’t get fined,” while forced to talk to the media during Super Bowl Week. Yep, Marshawn Lynch is one-of-a-kind, so there are so many stories about him that only add to his legacy.

One more that does just that? The time late last NFL season when he was considering an NFL comeback; ultimately joining the Seattle Seahawks for a few games (which included the postseason).

As part of a story from NFL.com about the details of Lynch’s return to Seattle, one of the stories that surfaced was this: Marshawn flirting with Seahawks offensive coordinator Brian Schottenheimer’s wife. No, really, that happened — and it did so during the first time the coach and the running back ever met in person.

According to Schottenheimer, Marshawn found a way to flirt with his wife while introducing himself.

Brian describes the encounter on NFL.com as “intimidating” when Lynch allegedly “looks me up and down and just says, what’s up dog.”

Sounds like par for the course with Lynch until he reveals what came next:

Lynch and Schottenheimer’s family were moments later introduced to one another and while Brian was away, Lynch continued with his wife in a private conversation. Brian’s wife, Gemmi, “came back smiling ear to ear” saying that Marshawn told her “damn, you smell good.”

Damn, Marshawn, you dirty dog, you. Looks like Beast Mode works off the field, too, huh?

Eventually, the story is just another part of the legacy of Lynch, and can clearly be laughed off by the coach. But, damn, who knew the running back had game like that off the field? Hopefully we get even more Marshawn in the upcoming NFL season, because he can’t just fade away into oblivion.