Mason Rudolph Apologizes For His Role In Steelers/Browns Brawl, Has ‘No Ill Will’ Towards Myles Garrett 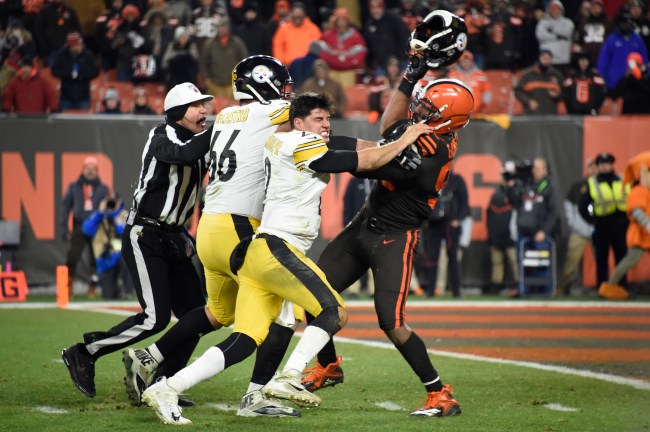 Turns out, nearly getting decapitated by a helmet was ultimately beneficial for Mason Rudolph, as he wasn’t hit with a suspension (fine likely coming) and it diverted the attention away from him throwing four interceptions in a 21-7 loss.

The Steelers quarterback caught some heat in the direct aftermath for appearing to try to rip Myles Garrett’s helmet off first before conveniently nuzzling his leg in Garrett’s dick-and-ball region. Many viewed Rudolph to be deferring all blame by calling Garrett’s overreaction “cowardly and bush league.”

On Wednesday, Rudolph met with reporters to issue a long apology for his role in one of the ugliest incidents in recent NFL memory.

Listen here or read the transcript of his words below.

Mason Rudolph speaks about the way our game vs. the Browns ended. pic.twitter.com/cfw9XEgMq1

“Before we get started, I had a couple of thoughts I wanted to share. Thursday night, to say the least, it was an unfortunate situation for everyone involved. I consider it a privilege, not a right, to be part of the NFL, to be part of a first-class organization representing the Rooney family and the Pittsburgh Steelers. I fell short of that expectation last Thursday night in how I played. I did not do a good enough job to help our team win the game. Looking back on the final play of the game, the second to the last play of the game, I fell short of the mark there too. I should have done a better job keeping my cool in that situation. In retrospect, I put Maurkice Pouncey, probably one of the best teammates I have ever had, in a tough spot, as well as my [other] teammates.

The way I saw it, on the final play of the game, with the game in hand the way it was. We had already lost two of our players to targeting penalties from the game,” he added. “As I released the ball, I took a late shot, did not agree with the way he then took me to the ground. My natural reaction was to just get him off from on top of me. Again, I should have done a better job handling that situation. I have no ill-will towards Myles Garrett, great respect for his ability as a player. I know if Myles could go back, he would handle the situation differently.

As for my involvement last week, there is no acceptable excuse. The bottom line is I should have done a better job keeping my composure in that situation. I fell short of what I believe it means to be a Pittsburgh Steeler and a member of the NFL. I understand there are going to be a few questions, but I think it’s in the best interest of our team, my teammates, our coaches to kind of move forward from this and move things on to the Cincinnati Bengals and keep looking to try to stack some wins here. We’ll open it up for a few and then I have to head to walkthrough.” [via Sports Illustrated]

Thanks for the apology, Mason. But we still have one itty bitty problem.