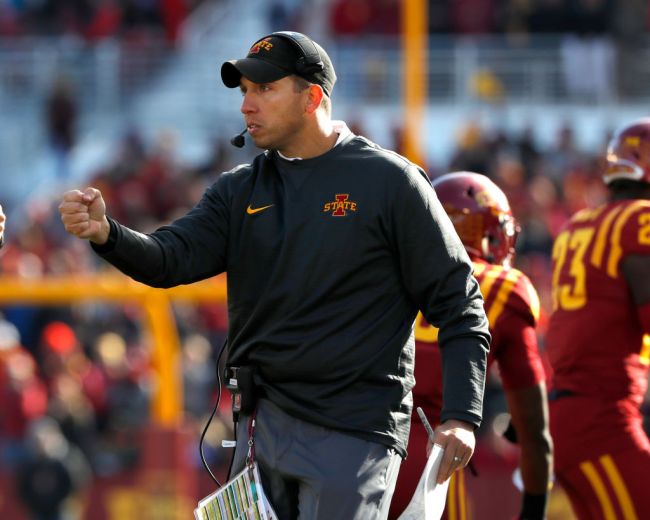 According to Dennis Dodd of CBS Sports, the 41-year-old was offered an eight-year contract worth $68.5 million to leave Ames for Detroit. The report has not been corroborated by other sources, but Dodd is one of the best in the game. He also said that, though he didn’t confirm it himself, that Campbell’s offer may have included full control of the program.

“Now if I’m Matt Campbell’s wife, I’m having some questions,” Dodd said. “But he sees his upward arch better at Iowa State than, look, the Lions that are annually at disarray. But look — I would take that money and take my chances at disarray for over the next eight years than Iowa State.”

Here’s the thing. Campbell is one of the more sought-after coaches to make the jump from the collegiate level to the NFL. Reports said that the Jets were “very high” on the Cyclones’ head man before hiring Robert Saleh. This came just two years after New York requested an interview with him in 2018. Campbell declined both opportunities, among others, to stay at Iowa State.

So while it might sound crazy to turn down an eight-year, full-control contract worth $68.5 million (it is), he’s betting on himself. Rather than jumping into the first opportunity presented to him and getting stuck with the perennial basement-dwellers, Campbell will continue to build his resume.

The Rise of Campbell.

Campbell’s collegiate coaching career began as a graduate assistant at Bowling Green. He became the offensive coordinator at Division III powerhouse Mount Union in 2005 and won back-to-back national championships. D-I programs started to take notice and Bowling Green called him back to coach the offensive line. He left one MAC school for another in 2009 and became the run game coordinator and O-line coach at Toledo.

Three years later, Toledo made Campbell the youngest head coach in the FBS at 32 years old. He won the Military Bowl in his second week on the job and passed on a chance to serve on Urban Meyer’s staff at Ohio State after the season. During his four years in Ohio, Campbell’s Rockets ammassed a record of 35-15 and peaked at No. 20 in the AP Poll.

Iowa State named 36-year-old Campbell its head coach in 2015 and he has built the program up from a 3-9 record in his first season. In year two, the Cyclones went 8-5 with wins over No. 3 Oklahoma and No. 4 TCU. In year three, they went 8-5 again, including a 6-3 record in Big 12 play— their most conference wins ever. Year four was a slight drop, but Iowa State came out and dominated the Big 12 in 2020.

As a result of his success, Iowa State signed their 41-year-old head coach to an extension through 2028, making $4 million each year.

That is more than half of the Lions’ $8.5 million per year offer, but Campbell appears to be at peace. The Cyclones return the vast majority of its roster, including star quarterback Brock Purdy and running back Breece Hall. If things go as planned, this 2021 team is expected to compete for a Big 12 title and be in the conversation for a College Football Playoff birth.

Should that come to fruition, Campbell’s phone will be ringing off of the hook for NFL opportunities. Maybe then he will jump ship, for a team that isn’t the Jets or the Lions.