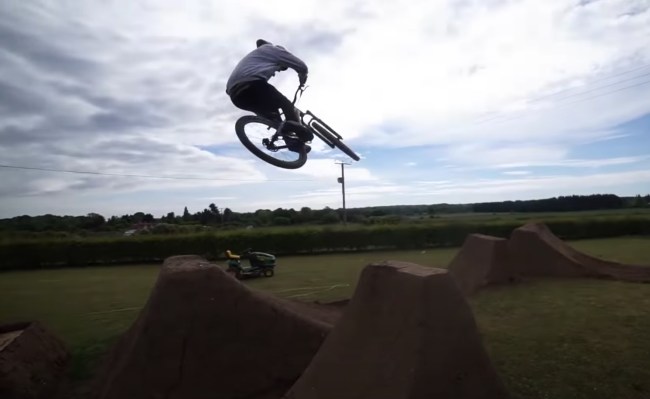 I completely respect those people across the planet who were able to kick it into a higher gear for the global lockdown and become extremely productive. ‘Productive’ isn’t exactly how I’d characterize much of my 2020 so far, I think ‘Surviving’ is a better way to paint the picture of what I’ve been doing for the past few months, but I really do respect anyone out there with the time, drive, and means to take on awesome projects like this one below.

Mountain biker Matt Jones is accustomed to a globetrotting lifestyle where he’s always on the move to the next great dirt track. There’s no shortage of amazing terrain across Europe as well as North and South America but when borders are closed and some people aren’t allowed to stray further than a few miles from their homes that really changes life for a professional mountain biker.

In order to stay in top MTB form, Matt Jones turned 100-tons of dirt into a truly sick dirt track right in his own backyard. This is something every mountain biker would love to have but it’s not exactly a project that most people have the time to undertake until, you know, the world stops spinning for a few months.

He put together this quick video for Red Bull which shows the finished product of turning 100-tons of dirt into a world-class backyard mountain bike track.

Sure, you could always pay some team to come in and do this for 10x the price but where’s the fun in that? It’s pretty doping seeing the work that went into something like this and the final product being so fulfilling.

What led me to this video above is actually this behind-the-scenes footage from a while back which shows what went into doing the first ‘Crane Wakeboarding’ stunt, how they picked the crane, and how they pulled it off. I realized I hadn’t been on the Red Bull YouTube Channel in a few weeks and there’s some excellent footage there right now:

Makes me want to go wakeboarding this weekend.