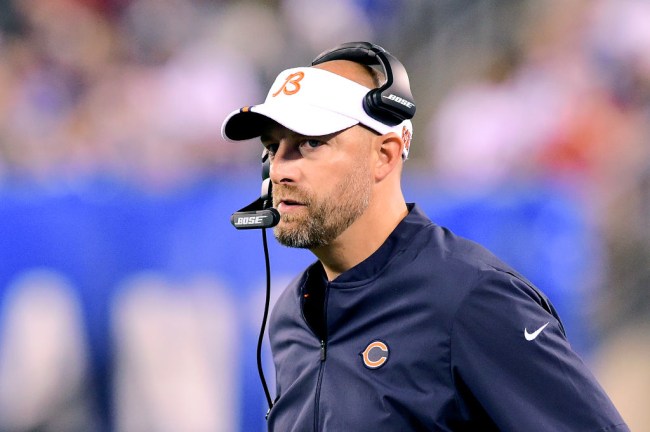 The Bears now find themselves on a two-game losing streak after falling to the Saints on Sunday 36-25. While they certainly aren’t out of the playoff hunt sitting at 3-3 on the year, things have not looked great for Chicago this season.

Two of Chicago’s wins have come against a now 2-5 Broncos team and a 1-6 Redskins team and the biggest problem this season has been the offense. The Bears rank third to last in the NFL averaging just 263.7 yards per game and fourth to last in passing yards per game with 193.7 yards.

While the fingers can obviously be pointed at the personnel, play-calling and just flat-out poor play from Trubisky head coach Matt Nagy decided to point fingers at the media possibly dividing his team following the loss to New Orleans.

Matt Nagy lectures the media about negativity. Says he’s telling players “horse blinders and earmuffs,” meaning you ignore all the negativity from the outside. Says he will not allow the media to divide the team.

That’s one way to flip the script on bad play-calling, which Nagy is responsible for, and a team seemingly going on a downward spiral.

I guess the media shouldn’t write about what led to the Bears’ loss against the Saints like the fact Trubisky went 34-for-54 through the air, or maybe the fact the team ran the ball a total of seven times for 17 yards and went 2-for-12 on third downs.

Nagy isn’t the first coach to point to the media as a distraction or problem while his team is struggling, but when the play calling is on your shoulders is so bad and your quarterback play is so poor it’s not the best of looks. It’s not like Chicago is playing good football and losing football games, it’s actually impressive the Saints only won by 11 points on Sunday.

Chicago welcomes the 2-5 Chargers to town on Sunday and if the losing streak goes to three games, well then Nagy really isn’t going to be happy with the media.